KUWAIT CITY, Jan 13: Kuwait National Assembly agreed to return to the Parliamentary Human Resources Committee’s the proposals regarding the increase of Kuwaiti staff at public posts and jobs. The head of Thursday’s session MP Hamad Al-Harshani adjourned the parliament’s special session after reviewing the proposals for laws and projects listed on the agenda. The parliament is scheduled to hold regular sessions next Tuesday and Wednesday.

The National Assembly, on Thursday, approved in the second deliberation a draft law to amend some provisions of the Printing and Publishing Law. Out of 50 attendees, only one voted against the Law, forty-seven voted for the amendment, while two others declined.

The amendments reduced the prohibitions from 11 to five, so the law prevents outraging public morals, as well as the disclosure of confidentiality and prejudice to the dignity of people and their religious beliefs, advocating or inciting contempt for any group of society and harming Kuwaiti relations with other Arab or friendly countries. The amendments reduced the value of infringing the 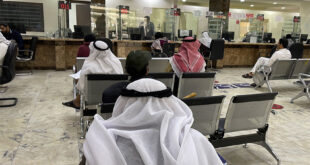 This post has been read 11801 times! KUWAIT CITY, April 19: According to labor market …