KUWAIT CITY, Aug 3: US Detail Zero website revealed that the Kuwaiti dinar topped the list of global currencies in terms of value; followed by the Bahraini Dinar, Omani Riyal and Jordanian Dinar, while the US Dollar ranked ninth globally, reports Al-Anba daily. The website quoted CNN Spanish- language news channel as saying that due to inflation which continues to rise around the world, currencies in all countries suffer from pressure and reflect the uncertainty of economies after suffering from the repercussions of the Corona pandemic followed by the Russian-Ukrainian war that affected oil prices; not to mention the slowdown in the economies of some countries such as China.

The channel pointed out that it is worth asking: What are the 10 most powerful currencies in the world? The Kuwaiti Dinar topped the list, not the US Dollar even if the latter is the most used currency in international transactions. The channel also quoted the Central Bank of Kuwait as saying that since 2007, the Kuwaiti Dinar has been linked to an undeclared basket of international currencies of Kuwait’s main trading and financial partners within the exchange rate policy aimed at maintaining and strengthening the relative stability of the Kuwaiti Dinar against other currencies, in addition to protecting the local economy from the effects of imported inflation.

This stems from the fact that between 2003 and 2007, the currency was pegged to the US Dollar; but Kuwait changed its policy after exhausting all means to absorb the negative effects of the depreciation of the US Dollar against major currencies over a long period. The channel inquired about the reasons behind Kuwait’s possession of the strongest currency in the world. The answer lies in oil, as the country has a rich economy due to the amount of crude oil reserves it owns — about 102 billion barrels or six percent of global reserves. Official data revealed that oil constitutes about 92 percent of Kuwaiti export revenues and 90 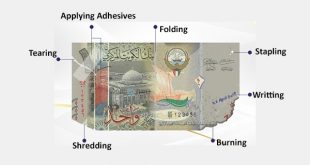