KUWAIT CITY, Feb 8:The Ministry of Interior Personnel from the Criminal Investigation Department (CID) are said to have put an end to the criminal activity of a three-man gang of Kuwaitis, who specialized in stealing cars, changing the numbers plates and using them to commit crimes and also dismantling the vehicles and selling their parts, reports Al-Rai daily.

The daily added, the arrest came after several people filed complaints with police stations in all governorates about thefts of cars and the police discovered the modus operandi was similar.
Acting on a tip-off about some illegal activity in one of the areas police put the targeted places under surveillance 24×7 and caught one of the suspects who was driving a stolen vehicle.

During investigation he admitted to the charges against him and said that he and two other persons stole 12 cars using duplicate keys and others left in operation by owners over the past seven months. He said after using the cars for some time to commit thefts, they dismantled the vehicles and sold parts. Police have seized from the suspects numbers plates of stolen cars. They have been referred to the concerned authorities 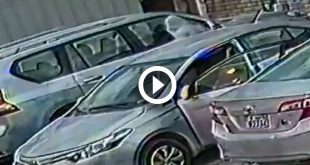 Don’t leave your valuables in your vehicles, CCTV camera footage captures a theft in Fahaheel