Kuwait wraps up 2020 with down tick

KUWAIT CITY, Dec 31: Kuwait stocks edged slightly lower on Thursday to wrap up the year on a tepid note. The All Shares Index slipped 3.88 pts in choppy session to 5,546 points even as the overall mood remained mixed. The Premier Market slipped 6.27 pct to 6,051 points trimming the month’s gains to 43 pts while Main Market ticked 1 pts higher.

The BK 50 Main index was down 6.5 points at 4,636.35 pts. The volume turnover meanwhile rose for the fourth straight session. Over 263 million shares changed hands – a 5 pct rise from Wednesday.

The sectors closed mixed. Oil and Gas outshone the rest with 1.41 pct gain whereas Insurance shed 2.90 percent, the worst performer of the day. Volume wise, Financial Services topped the volume with 186 million shares while Banking sector dominated in value with KD 27.5 million. In the individual shares, National Bank of Kuwait fell 3 fils to 840 fils after pushing 3.4 million shares and Kuwait Finance House followed suit to end at 681 fils with a volume of over 5 million. Ahli United Bank was up 3 fils at 227 fils with brisk trading Gulf Insurance Co tumbled 62 fils to 807 fils. Zain eased 1 fil to 606 fils after moving 1.9 million shares whereas Ooredoo was down 7 fils at 627 fils. stc inched 1 fil down to 852 fils and logistics major Agility dialed down 2 fils with a volume of over 2 million.

Humansoft Holding stood pat at KD 3.799 and Boursa too did not budge from its earlier close of K1.100. KIPCO was unchanged at 159 fils after pushing 3.2 million shares whereas KAMCO edged 0.9 fils higher to 73.9 fils. Kuwait Investment Co and KMEFIC took in 1 fil each while National Investment Co added 2 fils to close at 135 fils. Noor Financial Investment Co clipped 2 fils whereas Mabanee Co paused at 657 fils. The market opened on a tame note and pulled lower in early trade. The main index plumbed the day’s lowest level of 5,539 points and headed north in choppy trade amid buying spurt in some of the counters.

It peaked at 5,560 points in the final minutes before giving most of the gains at close. Top gainer of the day, Tamdeen Real Estate Co soared 9.76 pct to 270 fils while Educational Holding Co scaled 9.33 pct to stand next. Gulf Insurance Co skidded 7.13 percent, the steepest decliner of the day and ALOLA continued to top the volume with 111 million shares. Mirroring the day’s mixed closing, the market spread was almost even.

55 stocks advanced whereas 56 closed lower. Of the 129 counters active on Thursday, 18 closed fl at. 7,679 deals worth KD 29 million were transacted during the session. National Industries Group fell 1.68 fils to 176 fils after trading over 2 million shares while Mezzan Holding dialed up 2 fils.

KCPC fell 4 fils to 403 fils and Inovest dialed down 2.3 fils. In the banking sector, Gulf Bank and Burgan Bank were unchanged at 219 fils and 213 fils respectively whereas Kuwait International Bank took in 1 fils. Warba Bank added 2 fils on back of 1.5 million shares whereas Al Ahli Bank tripped 1 fil. The market was mixed during the week. The main index closed lower in three of the five sessions shedding 24 points week-on-week. It gained 87 points during the whole of December but has tumbled 736 points during whole of 2020 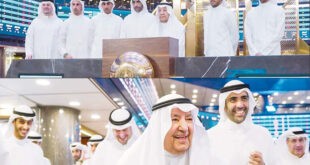