During the visit, His Highness held official talks with Turkish President Recep Tayyip Erdogan and handed him a written message from His Highness the Amir Sheikh Sabah Al-Ahmad Al-Jaber Al-Sabah, dealing with means of boosting bilateral relations and issues of joint concern. His Highness the Premier also held talks with his Turkish counterpart Yildirim, discussing their bilateral cooperation and ways to boost them on all levels.

He also invited the Turkish Prime Minister to visit Kuwait. Their talks also highlighted the developments in the region and the necessity of maintaining security and stability. Both sides also shared a desire to cooperate within the counterterrorism domain, stressing on the importance of regional and international peace and security.

Meanwhile, His Highness the Premier’s delegation held several meetings and talks with their Turkish counterpart, expressing gratitude to the Turkish initiative to exempt Kuwaiti citizens from visas to enter Turkey.

They also thanked the Turkish government for all the facilitations it provides to Kuwaiti visitors, particularly tourists, who reached up to 180,000 in 2016. The Kuwaiti-Turkish sides also expressed satisfaction towards the current level of their economic and investment cooperation, with Turkish officials urging their Kuwaiti counterparts to increase the volume of Kuwaiti investments in Turkey, which currently stands at $1.5 billion.

Also, the two countries’ officials signed six accords and agreements to develop relations on all possible domains during His Highness the Prime Minister’s official talks with Yildirim. A protocol to enhance a previous agreement within double taxation was signed between Deputy Prime Minister and Minister of Finance Anas Khaled Al-Saleh and counterpart Naci Agbal. 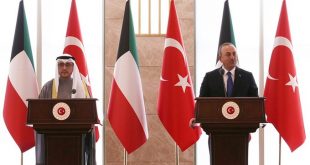