KUWAIT CITY, Sept 5, (Agencies): Kuwait National Football team tormented the Nepali National Team by 7 unreplied goals in the first round 2020 World Cup preliminaries for Group 2.
Yusuf Nasser opened the goal-scoring floodgate at the sixth minute into the game, followed by another goal by Fahad Al-Hajri in the 13th minute before Yusuf Nasser complemented it with the third goal at 50th and Abdullah Mawi made it four at the 59th minute with a solo effort.

Bader Al-Mutawa scored the fifth goal in the 67th minute, while two more goals were scored during the injury time by Redha Hani and Hussein Al-Musawi respectively. The Kuwaiti team started strongly with the 3/4/3 formation laid down by the Croatian-born coach of the national team Romeo Jozak placing Ali Salman Abdul Ghafour in the post defended by Fahad Al-Hajri, Fahad Hamoud and Hamad Harbi.

The Midfield was covered by Sultan Al-Enzi, Abdullah Mawi, Ahmad Al-Zufairi and Mubarak Al-Funaini. In the attack were Zaid, Bader Al- Mutawa, and Yusuf Nasser. The formation concentrated more on the midfield to ensure strong connection with the defenders and attackers, which became successful considering outcome of the game although the Blues wasted several scoring chances. 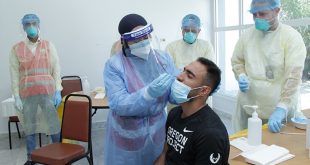