NEW YORK, Nov 14, (KUNA): Kuwait Representative to the United Nations on Tuesday renewed his country’s commitment to supporting the Iraqi people and government in their efforts to combat terrorism, and consolidate their national unity and territorial integrity. “Kuwait, a robust partner of Iraq, stands with the country in its efforts to ensure its sovereignty and stamp out terrorism,” Mansour A. Al-Otaibi said at the UN Security Council session on the situation in Iraq.

He welcomed the visit to Kuwait by Iraqi President Barham Saleh two days ago, saying it reflected the growing improvement of the neighborly ties and the shared desire to take the relationship to a new height. Ambassador Al-Otaibi welcomed the successful elections in Iraq in May as well as the subsequent peaceful transfer of power. However, he cautioned that the post-election phase could be a sensitive one.

Security
Noting that peace, security and stability cannot be achieved without sustainable development, he urged the international community to support the outcome of the international conference on the country’s reconstruction held recently in Kuwait. Warning that terrorist groups continue to pose a threat to Iraq’s stability even in places where the so-called Islamic State (ISIL or Da’esh) has been conquered he said partners must take all necessary steps to end those activities and ensure that the perpetrators are arrested and prosecuted.

Turning to the fate of Kuwaiti and third country nationals, who went missing during the Iraqi invasion of Kuwait in 1991, as well as missing property and assets, he welcomed efforts by Iraq to recover them and reiterated Kuwait’s commitment to help speed up that process. Ambassador Al-Otaibi asked the new government of Iraq to advance its investigation into the fate of Kuwait’s missing national archives, which represent a crucial part of his country’s heritage. He spoke highly of the efforts, being made by Jan Kubis, the Special Representative of the Secretary-General and head of the United Nations Assistance Mission in Iraq (UNAMI), to iron out the problems relating to Iraq, including the retrieval of Kuwait’s missing persons and property.

On his part, Kubis stressed, in a briefing to the Council on Iraqi progress in fighting terrorism, reducing sectarianism and peacefully transferring power, the critical importance of international support to the new government for its efforts to deliver basic services as well as to improve security.

Share
Previous All govt bodies ready to deal with unstable weather: MPW
Next KAC to participate in Intl Aviation Exhibition in Bahrain 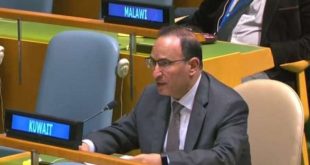