KUWAIT CITY, Jan 28: Kuwait celebrates the 13-year anniversary of the ascendency of His Highness the Amir Sheikh Sabah Al-Ahmad Al- Jaber Al-Sabah on Tuesday as he continues his responsible leadership of this nation and its people.

It all started when His Highness Sheikh Sabah stood in Parliament to be sworn in as the 15th Amir and ruler of Kuwait amid huge local support from the public and local officials.

The fourth child of Sheikh Ahmad Al-Jaber Al-Sabah, his wisdom and intelligence stems from a decades-long commitment to serving in the social, political and diplomatic spheres following extensive travel and tutelage at Al-Mubarakiya School; Kuwait’s first formal educational establishment named after the late ruler, Sheikh Mubarak Al- Sabah. Sheikh Sabah’s initial foray into public office came in 1954, when he was appointed member in the supreme executive committee tasked with the role of the regulation of government interests and bodies.

A year later, he was handed the role of director of the department of social and labor affairs, where he was instrumental in several factors, namely regulating the relationship between employer and employee. Upon the expansion of his role to include director of the publications department in 1957, Sheikh Sabah demonstrated a commitment to reviving old books and manuscripts and tasked a committee with writing the first book detailing the history of Kuwait.

Amendments
Kuwaiti journalism, regarded one of the most transparent in the Middle East, continues to thrive thanks to His Highness, who was behind the publications’ law, which remains in use until this day, albeit some minor amendments. As Kuwait declared its independence in 1961, he was appointed member of the Kuwaiti constitution’s founding council.

This was followed by his addition to the first official cabinet, where he assumed the role of minister of guidance in 1962. Only one year later, he began a journey as minister of foreign affairs, where he remained the top man responsible for delivering Kuwait’s diplomacy to the world for 40 years. On May 11, 1963, during the first year of Sheikh Sabah’s time in office as minister, Kuwait became a member of the United Nations.

Diplomatically, he was involved in Kuwait-hosted talks in 1966 between warring parties in Yemen, Egypt and Saudi Arabia aimed at putting an end to the Yemeni civil war. When the relationship deteriorated between South and North Yemen, with both involved in border clashes, Sheikh Sabah visited the two countries (at the time) helping forge a peace agreement in 1972. He also successfully mediated an agreement of diplomatic principles between Oman and South Yemen, which was followed by a joint announcement of the resumption of diplomatic relations from Kuwait in 1984.

Foreign policy
Throughout his tenure, the then minister assumed a balanced foreign policy that enabled Kuwait to overcome some difficult periods such as the Iraq-Iran War of 1980 and its repercussions on the internal and external security and stability of his country. He also forged a strong relationship with countries around the world, particularly the five permanent member nations of the United Nations Security Council.

These strong ties culminated in the emergence of a 35-nation coalition that helped liberate Kuwait from invasion by Iraq in 1991 as a result of a Security Council resolution that paved the way for a military offensive against the occupying forces.

In 2001, he was tasked with forming the Kuwaiti cabinet in the place of the then Crown Prince and Prime Minister the late Amir Sheikh Saad Al- Abdallah Al-Sabah, who was suffering from a medical condition. Two years later, Sheikh Sabah became prime minister upon Amiri decree. It is during his time as prime minister that his ability to guide domestic policy came to light.

The prime minister adopted a comprehensive development-based vision focused particularly on economic growth through support of the private sector and entrepreneurism amongst the youth. On the economic spectrum, a tour in Asia, including China, Japan, South Korea and Singapore, at the head of a business delegation in 2004 resulted in the joint signature of 10 mega deals and projects. He remained premier until 2006 when a cabinet session passed a motion appointing him Amir of Kuwait.

Over the 12 years under his reign, Kuwait has witnessed widespread development concentrated on a number of mega projects like Sabah Al-Ahmad Marine City – the first fully-developed by the private sector. His Highness the Amir made comments urging nationals to stand together in the face of challenges and threats, namely the June 2015 terrorist attack on Al-Sadiq Mosque,, which martyred 26 people and resulted in the injury of 200 more. Shortly after the suicide attack, His Highness took it upon himself to visit the location in person unannounced, where he uttered the renowned paternal words: “Those are my children”.

While leading thousands of Kuwaitis who came to attend the mass funerals for the victims, His Highness urged “the Kuwaiti family to stand together united through troubles and strife in tackling violence and fundamentalist rhetoric that aims to undermine the other.”

On the scale of his foreign policy, Kuwait over recent years had pioneering role in the global humanitarian field thanks to his wise policies. Kuwait hosted three pledging conferences for international governments and organizations, co-chaired a similar event in London and attended another European Union-organized event in Brussels.

The Kuwait-hosted donors conferences raised a total of $7.5 billion from attending nations, while Kuwait handed out a total $1.6 billion across all five gatherings as support for the victims of the Syrian confl ict. The endeavors overseen by His Highness earned him the unprecedented title of ‘Humanitarian Leader’ and Kuwait, the title of ‘Humanitarian Centre’, both granted by the United Nations. In February 2018, Kuwait also hosted a pledging conference dedicated to efforts aimed at rebuilding cities and towns in Iraq reclaimed from the socalled Islamic State group.

These efforts have been commended worldwide and have transformed from a unilateral effort to a global initiative, receiving the full backing of the United States and the European Union. Some 13 years after the ascendency of His Highness the Amir, officials from across Kuwait’s political spectrum sent statements on Monday marking the joyous occasion.

Kuwaitis from all walks of life share a “very special and transparent” relationship with His Highness the Amir, the Gulf state’s top lawmaker Marzouq Al-Ghanim said in a statement.

National Assembly Speaker Marzouq Al-Ghanim said the relationship between the ruler and the people from all walks of life is unique; thereby, safeguarding the foundations of justice and individual rights on one hand, and ensuring support and democracy on the other hand.

In a press statement on the occasion of the 13th anniversary of the reign of His Highness the Amir, Al-Ghanim affirmed that this balanced equation embodies the infl uence of HH the Amir “whether during the era of the advisory council or the constitutional era.”

He said this occasion entails that the people should acknowledge two facts: first, HH the Amir is a strategic leader and a guarantor of security, and second, popular support and absolute confidence in the vision of HH the Amir are prerequisites in helping him maneuver the country towards safety considering the current situation in the region. “As Kuwaitis, we are fully aware of the tremendous efforts exerted by HH the Amir in protecting the country; hence, the need for the people to support him in fulfilling his mission to maintain peace and to deliver his message of compassion in a region exposed to all forms of political interference,” the speaker asserted.

Addressing the citizens, Al-Ghanim stated that “as Kuwaitis, we have to work towards strengthening our internal front and solidify our national unity in both the social and political arenas for us to give the best possible support for HH the Amir in his unyielding pursuit of internal and external stability.” His Highness the Amir is among “a special breed of leaders” whose accomplishments speak for themselves, the Deputy Chief of Kuwait’s National Guard Sheikh Mishal Al-Ahmad Al- Sabah told KUNA.

He spoke of His Highness the Amir’s illustrious political career, in which he proudly devoted himself to the well-being of the nation, citing sincerity and altruism as among his innumerable virtues. His shrewd leadership has propelled His Highness the Amir to global prominence, being the first head of state to be honored by the United Nations, the official pointed out, in reference to his UN-bestowed moniker of “Humanitarian Leader.” Offering his congratulations as well, Kuwait’s Information Minister Mohammad Al-Jabri said the anniversary of His Highness the Amir’s ascendency is tantamount to a national holiday. As the Kuwaiti flag flutters under the sky to mark the occasion on Tuesday, Al-Jabri, who is also minister of state for youth affairs, said it was a gesture of gratitude for His Highness the Amir’s unwavering resolve to lead the country on a path towards prosperity.

Kuwait’s First Deputy Prime Minister and Defense Minister Sheikh Nasser Sabah Al-Ahmad Al-Jaber Al- Sabah on Monday congratulated His Highness the Amir on the 13th anniversary of his ascendency. “I extend my heartiest congratulations to you 13 years after your reign began,” the Kuwaiti minister wrote in a letter he sent to His Highness the Amir, saying the whole nation is proud of his “immeasurable achievements.”

Share on:
WhatsApp
Share
Previous Health insurance to go online soon
Next 3,900 cases sent for overseas treatment in first half of 2018 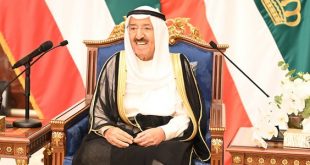 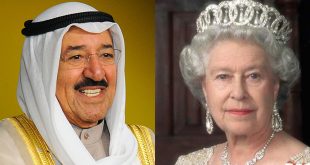 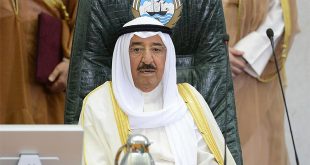 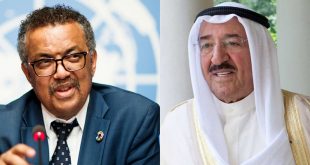