17 years and 5 months since 29th May 2002, when Kuwait Challengers Toastmasters Club was first chartered by three enthusiastic personalities who felt the need to improve their communication, leadership and presentation skills. TM Peter Banerjee, TM Santanu Das and DTM Anil Lobo founding members of Kuwait Challengers came together to form Kuwait Challengers Toastmasters Club as a corporate club under the sponsorship of Al Mulla Group of Companies, which soon opened its doors to the community at large.  A decade later the club faced difficulties and was at the verge of extinction when another zealous toastmaster, DTM John Joseph along with DTM Anil Lobo and club coach DTM Alka Kumra, worked towards reviving the club. The club since then bloomed into a reputed club and under the leadership of DTM Raymond Pereira grew leaps and bounds in membership, quality and packed meetings, and members personal growth. The club achieved educational goals to rank top 27 toastmasters club in the world, besides being a President Distinguished Club last year.  The club also produced a district champion, DTM Nancy Vijo who won the Table Topics and Evaluation contest in April 2019.

All the above definitely called for a celebration at the 400th milestone meeting. The events highlights were a well organized toastmasters meeting which included a meticulously prepared presentation, reminiscing the journey of Kuwait Challengers Toastmasters Club since its inception till date.  The milestone meeting was graced with the presence of the founding member TM Peter Banerjee, Club Growth Director DTM Alka Kumra, Division F Director DTM Fatma Abdo, Division E Director DTM Murli Manohar, guests, and members of Kuwait Challengers Toastmasters Club with their families.

The post meeting celebrations included cutting of the cake, a magic show, scrumptious dinner, and yet another highlight of the evening was a lucky draw hour with 16 prizes to win, which raised the tempo of the celebrations.

TM Ali Negaresh, taking up this event as his High-Performance Leadership project left no stone unturned to ensure the event was a success.     Toastmasters International is a non-profit organization with 358,000 members in 16800 plus clubs, spread over 143 countries.  The mission of Toastmasters is to develop communication and leadership skills in a supportive and positive environment, which helps build self confidence and personal growth.  At Kuwait Challengers Toastmasters Club members strive to accomplish this mission.  If you desire to improve your communication and leadership skills then visit us at Kuwait Challengers Toastmasters Club on 1st and 3rd Mondays, from 6 pm to 8 pm at Al Mulla Brokerage Building, 2nd floor, Mirgab, Kuwait City. You can also contact our VP Membership TM Aravind Babu at 99794561 for more details. 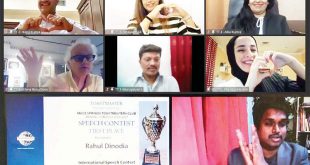