KUWAIT CITY, May 28: The Council of Ministers held a press conference in which His Highness Prime Minister Sheikh Sabah Al-Khaled participated with the participation of the Ministers of Interior and Health, during which His Highness announced the adoption of the gradual plan to return to normalcy taking into consideration all health, economic and social criteria, guidelines and indicators.

“We adopt a plan for gradual return to normal life, based on experiences of many countries, prepared by experts and specialists,” he told an online news conference following a cabinet meeting.
We took into consideration health, economic and social aspects, and to gradually open based on health indicators which will show the degree of compliance with health instructions and to live up to social responsibility.”

The minister also indicated that there are new areas that will be isolated alongside the currently isolated Jleeb Al-Shuyoukh. On the academic year, Al-Saleh announced that legislation will be submitted to the National Assembly to confront visa sellers and two companies have been referred to the prosecution for human trafficking. 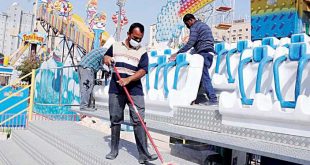