KUWAIT CITY, Feb 1: Kuwait Airways Corporation denied reports published on various social media platforms that it has stopped operating flights to London and New York, reports Al-Qabas daily. The corporation asserted this is absolutely baseless as the current suspension of New York and London flights are due to the current health situation, its impact on supply and demand, and in line with the instructions of health authorities as part of efforts to curb the spread of corona.

On the New York-London direct flight, the corporation explained this has been suspended for years for commercial reasons due to its operation as a direct flight, as the case with other direct flights.

It is worth mentioning that reports published on social media states: “Kuwait Airways canceled its routes to New York and London after the Zionists won a ruling that forces Kuwait Airways in America to allow them to board on its flights to London.” 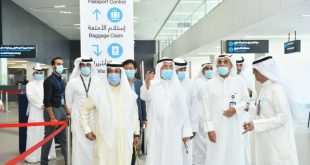