KUWAIT CITY, May 19: In confirmation of what was published indications are that life is gradually returning to normal with specific measures in the country is on its way.

In this context, the authorities operating in Kuwait International Airport have taken the first preliminary steps for the return of air traffic by reviewing their logistic services provided to travelers and airlines in preparation to restart commercial flights gradually in the event of a government decision to do so.

An official source revealed that the agencies operating in the airport are in talks with the health authorities for measures to be taken for returning passengers to Kuwait, hence the procedures for smooth flow of passenger traffic and employees is being studied, especially that civil aviation is responsible for overseeing and coordinating with all government and private agencies operating at Kuwait Airport.

Getting prepared
As the preparations at the airport to restart life after corona back to normal state the source stated that the first stage includes making sure of the devices and equipment used in the airport facilities are in proper working condition, especially as the the air traffic has been suspended for a long time. The civil aviation is responsible for managing and operating the airport and supervision of the services and facilities provided therein for air traffic.

The source said, “We are ready whenever we are assigned by the cabinet or under the direction of the health authorities to restart the returning flights, currently no decision has been made yet by the cabinet to return commercial air flights as they were in the past.”

Facilities
The most important feature to restart the operation is related to the engineering department is to ensure baggage devices for arrivals and departures, air-bridges, navigational lighting for yards and runways, parking and guidance devices, video and audio guidance system, as well as systems for inspection and security monitoring devices, as well as cooling and air-conditioning for the passenger terminal and airport facilities, monitor the stability and continuity of the electrical current through backup generators and batteries.

The Deputy Director General of Kuwait International Airport Affairs, Saleh Al-Fedaghi, addressed a number of departments at the airport explaining to them that they are in the gradual operation of commercial flights to and from Kuwait, calling for work to prepare all matters related to the operation process and to ensure that all the devices, equipment are in working systems in general and to inform him of any constraints.

Special systems for sanitization travelers and their luggage

The operation of restarting the airport is governed by international procedures and laws, as per the international standard electronic equipment.

The sources pointed out that the government is keen to put the best levels of protection at the airport in easy and accessible ways for travelers without affecting them and health workers.

The civil aviation formed a team to put in place the airport operating mechanism, and it met with health, interior, services and aviation companies, and more than one study was approved, which will be referred to the Ministry of Health for approval and delivery to the Cabinet.

According to the sources, the operation process will be partial in the beginning to give confidence to future travelers and work to put in place mechanisms to protect them during their departure or return.

Till the vaccine is found the strict procedures such as social distancing, avoiding gathering of passengers, touch free counters, electronic check for boarding and luggage, special devices to sterilize the traveler and his luggage that will be provided at the airport besides wearing masks and gloves.

Similarly there are countries that will apply health regulations and laws for those who wish to travel by pre-examining the travelers to prove that they are free from Corona, as well as countries will be classified in the case of operating trips to 3 categories, which are endemic countries and less epidemic and free from the epidemic. 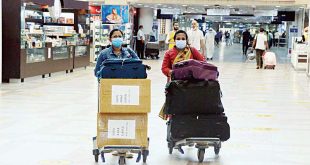