DHAKA, Oct 3, (AFP): AJapanese citizen was shot dead by gunmen in a northern Bangladesh town on Saturday, police said, days after an Italian aid worker was murdered in an attack claimed by the Islamic State group. Police said the victim, whom they named as Hoshi Kunio, aged 66, was riding in a rickshaw when he was shot dead in Kaunia town in Rangpur district at about 10:30 am local time (0430 GMT).

“He was travelling to the town from Rangpur city, where he had been living for a while, on a cycle rickshaw when his vehicle was stopped by three men riding on a motorcycle,” deputy police chief of Rangpur, Saifur Rahman, told AFP. The Bangladesh government sought to allay concerns over the safety of foreign nationals in the country after the second killing in a week, saying it was taking both murders “very seriously”. “Whoever is involved with the killings will be identified and brought to book,” Asaduzzaman Khan Kamal, the Home Minister, told reporters. Kunio was a frequent visitor to Bangladesh and worked on a farming project in Rangpur, about 300 kms (180 miles) north of the capital Dhaka, police said. “Two of the assailants shot him twice in the chest with pistols while the other waited with the motorbike ready to flee,” local police chief Rezaul Karim said, adding four people had been interrogated over the murder but none had been arrested.

Kunio’s landlord Jakaria Bala told Bengali daily Prothom Alo that the victim had leased a piece of land in a village near the Kaunia town to grow grass for cattle. A Japanese embassy spokesman in Dhaka told AFP that they were seeking more information regarding the deceased. “According to the information we got from the law enforcement agencies, it appears to indicate that he was a Japanese who is in his 60s,” Takeshi Matsunaga told AFP.

His body was taken to Rangpur Medical College morgue. Police have not yet identified any motive for the murder. The attack came less than a week after an Italian aid worker was shot dead near the capital’s diplomatic zone. The government has sought to calm escalating security fears in the country after the attack was claimed by the Islamic State group, describing it as an “isolated incident”.

International schools closed temporarily and Western embassies restricted their diplomats’ movements, while Australia’s cricket team cancelled a planned tour of the country over security concerns. Bangladesh prides itself on being a mainly moderate Muslim country. But the gruesome killings of a series of atheist bloggers this year have rocked the nation and sparked a crackdown on local hardline Islamist groups. 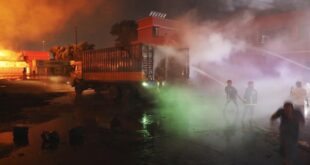 This post has been read 5370 times! Police escort a member of a banned militant …