BAGHDAD, Dec 22, (Agencies): Thousands of protesters poured into the streets of Baghdad and Iraq’s southern provinces Sunday, rejecting a nominee for the post of prime minister who some say is too close to Iran.

The demonstrations comes ahead a Sunday midnight deadline for naming an interim prime minister, with no apparent solution in sight. The protesters closed roads in southern provinces, including oil-rich Basra, saying they won’t accept the nomination of the outgoing higher education minister, Qusay al-Suhail.

Iraq’s leaderless uprising has roiled the country since Oct 1, with at least 400 people killed in the violence. Thousands of protesters have taken to the streets in Baghdad and the predominantly Shiite south to decry corruption, poor services and a lack of jobs, while also calling for an end to the political system imposed after the 2003 US-led invasion.

On Friday, al-Sistani, in his weekly sermon delivered by a representative, called for political blocs to form the government quickly. The Iranborn al-Sistani said that the new prime minister should be accepted by the public. 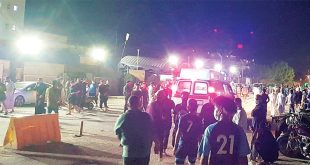 WASHINGTON, June 17: The US House of Representatives voted on Thursday to repeal a military …