Foreign Ministers representing the three European signatories of the 2015 Iran nuclear deal (France, the United Kingdom, and Germany) responded with predictable condemnation when the Iranian regime announced that it had resumed enrichment of uranium to 20 percent. The move comes roughly a year after Iran abandoned the restrictions it had reluctantly imposed on its nuclear enrichment and stockpiling when the deal went into effect in 2016.

This latest escalation is particularly significant because it openly places Iranian nuclear facilities only a short technical step away from enriching uranium to 90 percent, which would make the material weapons-grade. Furthermore, the new enrichment is taking place at a well-known facility at Fordo, currently barred from being the site of such activity.

“We strongly urge Iran to stop enriching uranium to up to 20 percent without delay,” the EU-3 said in their recent statement, adding that they also expect Iran to “reverse its enrichment program to the limits agreed in the [agreement] and to refrain from any further escalatory steps which would further reduce the space for effective diplomacy.” The international community should now be asking the same question Iran is no doubt already asking in response to this statement: “Or what?”

Europe’s expectations are reasonably clear, but what is not at all clear is what consequences, if any, the ruling theocracy would face if it refused to fulfill those expectations. Until this is made explicitly and clearly stated, the Foreign Ministers’ statement amounts to nothing but empty words. And words alone cannot possibly be expected to have a meaningful impact on the behavior of a regime that is so deeply committed to malign activities aimed at extracting concessions from its negotiating partners.

Tehran has a long history of utilizing the strategy of blackmail and with great dividend. Yet Western powers have rarely responded in kind. They have continued operating on the plainly fraudulent assumption that if they extend a friendly hand to the “moderate” elements within the Iranian regime, they could successfully encourage more moderate behavior.

Chief among those “moderates” are Hassan Rouhani and his Foreign Minister Javad Zarif. While engaging their western interlocutors during the nuclear talks, they have spent that entire time promoting and defending the actions and ideological goals of their “rival” faction, associated with clerical Supreme Leader Ali Khamenei. And over the past year, Rouhani and Zarif have specifically and repeatedly affirmed their support for that faction’s position on the nuclear deal as well as other issues including terrorism and malign activities in the region.

Case in point, Assadollah Assadi, a senior officer of the Ministry of Intelligence and the third secretary of the Iranian embassy in Vienna is on trial in Belgium. He was the mastermind of the plot decided at the highest levels of the Iranian regime to bomb the “Free Iran” gathering of National Council of Resistance of Iran with 100,000 participants on June 30, 2018 in Paris. Judicial investigation has concluded that Assadi personally transported explosives and detonators from Iran to Vienna on a passenger plane and delivered them to a pair of terrorists in Luxembourg. In Assadi’s indictment, the prosecutor stated that the main target of the conspiracy was Mrs. Maryam Rajavi, the NCRI’s president-elect.

The real function of Rouhani and Zarif should have come as no surprise to Western policymakers. After all, Rouhani’s prior career included a stint as his country’s chief nuclear negotiator, after which point he openly bragged that he and his colleagues had forestalled American and European pressures by creating an atmosphere of apparent cooperation, thereby leaving Tehran free to pursue advancements to certain aspects of its nuclear program which were not then under close scrutiny. Many critics of the JCPOA understandably feared this same outcome, albeit on a much larger scale, and justifiably so.

Whatever the precise consequences of that acceleration may be, there is a larger danger at hand which stems from the impunity Tehran has enjoyed. And when they continue to face no real consequences they will move right along to the next item.

On the very same day that uranium expansion accelerated, Iranian naval forces also captured a South Korean-flagged tanker and began holding it hostage, apparently in hopes of securing the release of funds frozen in South Korean banks. The move is reminiscent of countless other instances of terrorist kidnapping aimed at securing prisoner swaps or other forms of ransom from other countries. It is also consistent with the JCPOA violations, insofar as that agreement too is being held hostage – a symbol of the looming possibility of Iranian nuclear weapons capability, which the European Union is desperate to avoid. Unfortunately, that desperation is pointless if it only spurs the Western world to fecklessness instead of action. If the regime doesn’t face consequences for the latest violation, it will only be more incentivized to dangle the nuclear weapons issue over the heads of its Western partners, believing there is little to be lost and everything to be gained. Arguably worse still, if Europe continues refusing to outline consequences for this, the Iranian principle of hostage-taking will be reinforced, and more foreign nationals will fall into the regime’s hands as bargaining chips. 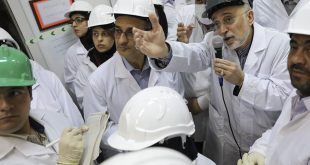 MORONG, Philippines/MANILA, May 23, (RTRS): Filipino Wilfredo Torres was hired as a technician for Southeast …