KUWAIT CITY, July 16: In a new trick to defraud people, “hackers” have started flooding the local network with phone calls bearing local numbers, while hiding the last number of the Kuwait international call key. This is a new tactic different from previous ones during which numbers from unknown countries, mostly from African countries, were used.

In this regard, the Information Security and Cybercrime Adviser Colonel (Rtd.) Raed Al- Roumi said, “The aim of such communications is strictly commercial, taking advantage of the call-back tariff on this number. These communications count for a full minute even if the call lasted for just a few seconds. In an attempt by those responsible for these fraud operations to change the nature of their communications, they have started using local numbers. My constant advice is not to respond to any numbers that are unknown to the caller.”

He indicated that he receives calls that bear the international keys of Arab countries, but he doesn’t pick those calls, as the callers can text or find other means of reaching him if they really want to communicate , reports Al- Rai daily. Col. Al-Roumi stressed that these fraudsters take advantage of the psychological and curiosity aspects of a person to call back and know the identity of the caller, adding that most of these contacts are from African countries and some unknown Asian countries.

He said, “There are applications that impersonate phone numbers. In some instances, it appears as if a friend or an acquaintance is the one who is calling. The charges of these apps are not too expensive.”

Al-Roumi warned of these apps, saying, “They may use number spoofing applications to break families, or cause problems with the authorities, and things will remain murky for the victim until proven that his number was cloned.” 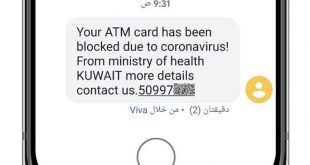 KUWAIT CITY, April 22: An unidentified Iranian woman was robbed off her money after the …