July 22, (RTRS): French construction group Bouygues is employing more than 100 Indian laborers to work on a hotel it is building in Cuba, breaking a taboo in the Communist-run country on hiring foreign labor in order to meet increased tourism demand. The Cuban government removed a key barrier to hiring foreign workers with the passage of a 2014 foreign investment law that authorized “special regulations” concerning foreign workers under “exceptional circumstances.” Cuban government officials did not immediately respond to requests for comment about the influx of foreign workers, several dozen of whom spoke to Reuters in Havana. But the Bouygues move, which was also confirmed by a company spokesman, is the first time a firm has bypassed Cuba’s state-run labor halls to hire foreign workers en masse.

For a country struggling to prop up export revenue in the face of low commodity prices, foreign workers on the Caribbean island signal how critical tourism is now in Cuba and how market forces are transforming its once tightly controlled economy. Already popular as a low-cost beach resort for Europeans and Canadians, Cuba is seeing a surge in American visitors since the United States and Cuba announced in December of 2014 that they would work to normalize relations. Tourism increased 17 percent in 2015 and was up over 11 percent through June this year, official data shows. It generated $2.8 billion in revenue last year. Meanwhile, the trade deficit in goods widened by $1.5 billion last year.

At least three new hotels are under construction in Havana, the first new five-star hotels to be built there in a number of years. Another dozen under negotiation with potential investors, according to the Cuban tourism industry. One reason Bouygues is turning outside of Cuba for labor is because Cuban skilled tradesmen are opting to work in the private sector where they can earn much more than from the state. The Indian tradesmen, who are being housed together east of the capital, are part of a much broader trend of such workers who emigrate to various work sites — especially in the Middle East — in search of higher wages than they can get in India. The practice, however, has not been widespread in Latin America or the Caribbean.

Bouygues has already brought 200 Indian workers into Cuba and plans to bring more in the coming months, according to diplomats familiar with the situation and a Havana-based company employee who asked for anonymity due to restrictions on talking with the media. “It is true that the group is bringing in Indian workers trained in various parts of Bouygues … throughout the world,” a Paris-based spokesman for the company said. The Indians would be training local tradesmen in Cuba in addition to working directly on the projects themselves, he said.

The laborers are working on two hotels in Havana and another at the Varadero tourism resort, the sources said. While Bouygues is co-managing the projects, foreign firms are required to partner with state-run construction companies that have strict limits on how much they can pay Cubans. They can pay foreign workers more, however.

“The Cuban workers are not paid well so there is little motivation,” a western diplomat familiar with the pay differential said, requesting anonymity due to diplomatic protocol. “The Indian workers are being paid around 1,500 Euros a month, more than 10 times what their Cuban counterparts receive.” A few dozen of the skilled tradesmen, wearing orange jump suits, said they were happy to be in Cuba for at least a year. The Indian workers were emerging for lunch from the Manzana de Gomez, an ornate building being converted into a luxury hotel in downtown Havana.

Chopra Inderjeet Singh, a bearded, slim electrician wearing a turban that is seldom seen in Havana, said there were more than one hundred of his countrymen working on the project as electricians, carpenters, plumbers and masons. He did not mention training locals. The Indian workers said they were paid according to their skills, but would not reveal how much. “To date their biggest complaint has been that they want some Indian food and a cook is on the way,” the Bouygues source said. Singh, who arrived two months ago, smiled when told the news. “Yes, that has been a problem. We like spicy food,” he said. 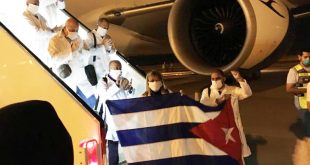 Cuba’s Fidel Castro, who defied US for 50 years, has died

US airlines to start commercial scheduled flights to Cuba