Recently, the Bengali Cultural Society, one of Kuwait’s oldest non-profit Indian socio-cultural organisations, organised a live concert at the Indian Community School auditorium featuring Sourendra and Soumyajit, an Indian pianist and vocalist musician duo renowned for their eclectic brand of music. The live show, the first one to be held in the last two years, was enjoyed by a packed auditorium.

Sourendro Mullick and Soumyojit Das are two very special Indian musicians known for bridging the old and the new, merging the traditional with the contemporary in their music. Their talent, ingenuity, vibrant melody, and experiments with soul, folk and traditional music have helped create a large listenership in India and the diaspora. In recent times, they have curated some very special concerts commemorating important events in India and abroad. Based in Calcutta, the cultural capital of India, the two musicians regard themselves as world citizens who create, produce and perform musical experiences that transcend genres and language. Soumyajit, the vocalist, likes to experiment with various musical genres ranging from classical, semi-classical, ghazals, thumri, contemporary music and playback songs. His partner, Sourendra, plays the piano in a style that combines the nuances of Indian classical music and the western grammar of the piano.

Inspired
When asked if a tradition of music at home inspired the duo to pursue the artform, Soumyadeep says, “I don’t even remember a time when I was not singing. As a child, I remember listening to music and interpreting it with my childlike imagination, or I was probably singing some tune somewhere. But I think music is that one mission in me, which I’m carrying from the last few lives that I have lived. This is what I believe.” Sourendra’s parents were inclined towards music. His mother, like most Bengali women, could carry a tune well. “Both my parents were inclined towards music, and they tended to listen to different kinds of music and appreciated them.” As a child, Sourendra was exposed to a wide range of musicians, including Debabrata Biswas, Lata Mangeshkar, Music from Arabian Nights and Elvis Presley. “ I’m very grateful to have been born in this family,” he says.

Both Soumyajit and Sourandra are not only prodigiously talented, but they are also highly trained musicians. Soumyajit has trained under the legendary Pandit Ajoy Chakraborty since 1996, while Sourendra learned music from greats like V Balsara, who introduced Indian classical music on the piano and Ustad Vilayet Khan, the legendary sitarist, whose sitar attempted to mimic the sound of the human. The role of the guru or the teacher is of utmost importance in Indian classical music. The guru has the most critical role to play in the growth and development of the musician as an artist, and it won’t be wrong to say that they continue to be a decisive figure throughout a student’s lifetime. Soumyajit and Sourendra are no exceptions. “I am so grateful to my Guru Ajoy Chakraborty for bringing me out of all the shackles that generally traditional Indian music comes with,” shares Soumyajit when asked about his guru’s infl uence. “I am so fortunate that this legend has introduced me to this huge sky that is Indian classical music. He has given me all the liberty to interpret it and has also shown me the responsibility of interpreting it. Infact Indian classical music has become my lifestyle. So Guruji’s infl uence on me is not only limited to my music, but he has impacted my lifestyle.” Sourendra speaks about learning not just from their teachers but also from their experience as musicians. “Our teachers have been very liberal,” he says. “But it is not that we have only learned from our gurus. We have learned from everywhere. We learn from every human behaviour we see around us. We travel very often. Throughout our travels, we collect data and try to translate them on to our projects, our music and our compositions.”

Unique
In 2005, the duo went on their maiden European tour and established their band You & I the same year. By focussing on diverse musical traditions, acoustic phenomena, and experimentation, the duo created a unique soundscape that is their own. Soon, they could be found composing music across various genres ranging from experimental music to ghazals, traditional sounds, Bollywood music to folk. One of their fortes is collaboration. Some of their spectacular productions include Jaya Hey — the 40 legends led Indian national anthem featuring Dr M. Balamurlikrishnan, Pt Shiv Kumar Sharma, Rashid Khan and Pt Jasraj. They have travelled the world and performed at prestigious venues, including the famous Rudolfstadt festival, Moers Festival, Nehru Centre, and the British Museum. They have performed for the Prime Minister and President of India, and every live curated project of theirs is a spectacle in the offing.

How do the two synergise their musical vision? Music can be intensely personal. Musical collaborations can be difficult to sustain. “This is a very tricky question,” responds Soumyajit. “As far as I am concerned, I am a very poor student of music, and I celebrate myself as a poor student of music learning and getting introduced to this huge world of music every day.”

To Sourendra, the duo’s strength is in being together. “Soumyadeep and I work with our regular set of musicians. It is a thought that we create together. This togetherness is our strength.” Sourendra acknowledges the initial hardship the duo faced while promoting their kind of music. “But our togetherness has been our greatest strength to me. Initially, we faced a lot of hardship in promoting our musical vision, but our togetherness, our greatest strength, helped build it up. Today we work on massive projects in which we collaborate with international stars and legendary musicians and perform in front of an international audience or Prime Ministers and Presidents. We do it with the help of our young team workers. We have exquisite ideas and concepts, and we can only present them in the right spirit because we have great people who come together to support us.” – By Chaitali B. Roy Special to the Arab Times 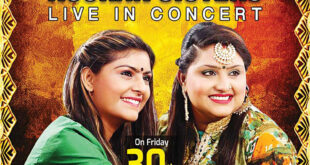