KUWAIT CITY, June 29: The Police patrol in the Ahmadi area detained an Indian expat suspected to be in an abnormal condition strolling naked on Fahaheel Road. The Ministry of Interior received several reports of a person who stripped himself on the highway.

When security men arrived at the location they found a nude person moving from one place to another. His behavior seemed to be abnormal and the security personnel were able to arrest him. The accused has been referred to the competent authorities to carry out a medical test on drug abuse. A case has been registered against him.

Share
Previous 6 Egyptians killed in an horrific accident
Next Over 10,000 vehicles barred from the roads in last 6 months 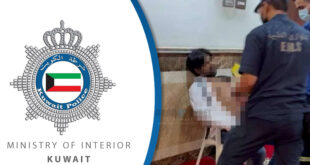