KUWAIT CITY, Oct 6: The Audit Bureau has approved the request of the Public Authority for Civil Information (PACI) to launch home delivery service of civil ID cards on request, the decision has been approved and a local company has been awarded a contract to deliver reports Al Qabas.

The sources informed that the Bureau approved the Civil Information Authority’s request at the end of August for 650 fils for each Civil ID card delivery for a period of one year, provided that the implementation will take place within 3 months.

Meanwhile the Public Authority for Civil Information denied on its twitter what is being circulated about the fees for home delivery the civil ID stating that the delivery price has not yet been announced.

PACI recently launched an update for the My Identity application to be compatible with the new operating system for the iPhone devices that Apple recently launched. PACI has also increased the delivery time for Civil ID card in its main building in  South Surra area, from 6 am in the morning until 8 pm in the evening, in addition to the renewal and change of photo, registration of first-time servants, completion of birth and nationality data for those who have reached the age of 18 years, registration of family, residence for Article 24, 23 and 19 And 18 and 17 through the electronic envelope 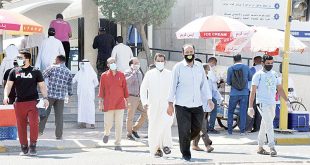