KUWAIT CITY, Feb 22: Scores of Hawally residents say they are dissatisfied because they felt neglected by the authorities given the amount of slums and garbage scattered all over the area, add to this the abandoned partly demolished houses, which have become a dumping ground and breeding haven for stray cats and dogs. During the tour of the area, the Al-Seyassah daily discovered the Hawally region also suffers from hygiene issues because of the tons of garbage which has piled up on the interior streets and they blamed the cleaning companies of deliberate negligence

A Kuwaiti, who identified himself as, Saud Al-Azmi says the Hawalli area has become one of the areas that can be termed as full of irregularities because most of the area is commercial and the area depicts the look of a slum area.

The partly demolished houses hurt the eye of the onlooker and it is time for the government to hold those responsible for the lack of hygiene in the area. Another Kuwaiti affirmed the biggest problem faced by the residents of Hawalli is lack of hygiene. “I live in Jabriya and visit Hawalli daily to go to a café and watch daily how garbage containers overflow with dirt, but unfortunately the responsible authorities are reluctant to do part of their work as if there are no people living in these areas. The suburb of Hawalli area once considered the most elegant of the areas, but unfortunately now it depicts a big slum of some Third World country full of abandoned dilapidated buildings. The situation has been the same over the years, says another Kuwaiti who refused to give his name.

Resident Samir Ahmed says on any given day the Hawalli area is already full of garbage which is disgusting to the eye. The situation attracts the attention of all those live in or pass by the area, except the concerned authorities.

It looks as if the Hawalli area is competing with Jleeb Al-Shuyoukh in terms of cleanliness. Mahmoud Awni stated the deserted and collapsing houses have distorted some of the region’s streets, and these areas can help promote drugs. He indicated the most prominent violations in the Hawalli area are the encroachment on government land because tables and chairs are placed randomly even on footpaths in front of the cafés. To add insult to injury, most of the streets suffer from bad maintenance and every few meters no one can miss potholes here and there.

Share
Previous 899 newly infected with coronavirus; 5 deaths
Next ‘Minister of Information violations to be probed’ 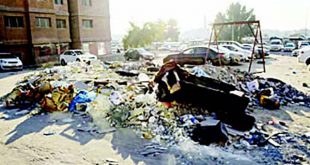