Governments of ‘there’s nothing in this country but this boy’

IS there a Deep State that is working on sabotaging Kuwait and creating a rift between the state and the people? Or has the executive authority lost its bearings, as it hardly comes out of a hole until it falls into another deeper one?

It seems that the enemies of change are stronger than everyone; they win because they are always mobilized to abort any development project. It seems as if Kuwaitis were destined to get out of this era and dwell in the corridors of seclusion forever. Are the enemies of Kuwait’s renaissance powerful to such an extent?

Isn’t it time for us to come out to light, open up, and revitalize the economy like the way it is happening not only in all the countries of the region, but also the entire world?

Indeed, the knife has reached the bone due to the lack of awareness about the magnitude of the loss incurred by everyone, including the society, education sector, and the national economy, which is increasingly shrinking after the expulsion of foreign investment and with the migration of the national investment. So where do you want our country to go?

Opening the borders to tourism means revitalizing the economy as a whole including hotels, restaurants, and even taxis and the retail sector. However, we do not understand the wisdom behind preventing the issuance of tourist visas. It seems as if Kuwait is the Garden of Eden that only the pious can enter, hence the rigorous vetting. The transit industry has become a mainstay in the national income of many countries, as visas are granted at airports.

As for outside the region, there is Turkey where its government saw a decrease in the number of tourists, and decided to issue an order for visitors to obtain an entry visa at the airport. Subsequently, the tourism sector flourished, and eventually the rest of the sectors. Now the Kingdom of Saudi Arabia is issuing tourist visas from the airport or electronically.

As for Kuwait, about 40 years ago, the governments yielded to the tendencies of the MPs of the Muslim Brotherhood Group or other Islamists, and imposed on visitors restrictions that only exist in the Taliban state. We thus started seeing an economic decline that was later aggravated by the unrealistic precautionary measures to fight the COVID-19 crisis, which struck the last hope of a possible rise.

The infrastructure in Kuwait can accommodate 20 to 30 million visitors annually. So why not turn it into a tourist destination, like all other countries? Those who violate the country’s rules can be fined and expelled from the country, as is the case in Europe and the rest of the Arab and Gulf countries, which opened its doors to everyone, and worked on the development of security agencies.

Indeed, we do not know whom to address our words. The country has been afflicted with governments that are like those who walk in a dark corridor and strike random bangs. Are we living in the shadow of the state’s systematic sabotage? This is because, despite our constant wait for a glimmer of hope, we are not surprised by the increase in the rate of absurdities and flagrant abuse of the national economy.

All over the world, the government, i.e. a government, is given a probationary period to work and achieve. When it is unable to implement any project or when it makes a mistake in a decision, it gets fired or it resigns. However, in Kuwait, things seem to remain as they have been for decades, and the regression increases, as if there is nothing in the country except “this boy”.

When will those in control realize that we are outside the era and history, and that closing the country will increase losses, while there is fear that the state will not find money in the near future to spend on its people? 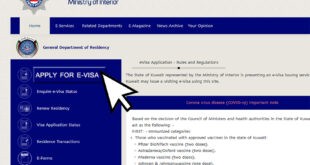 This post has been read 22154 times! KUWAIT CITY, Sept 15: The Residency Affairs Department …