IT is easy to wage wars, but it is very difficult to rebuild what has been destroyed, especially in an international pariah area such as the Gaza Strip, which is controlled by the Hamas group that is classified as a terrorist group globally.

The firm American position was based on this aspect. President Joe Biden said, “We will prevent Hamas from benefiting from the funds intended for the reconstruction program of the Gaza Strip. We will mobilize international support necessary for this reconstruction campaign”.

It has been clear since last Friday that this group, which works according to Iranian directives, has realized that the pressure cards it exercised during the conflict are no longer valid during the time of ceasefire and negotiations on the basis of the American initiative for the establishment of two states.

The Hamas leader Khaled Meshal tried to block the support project, saying, “The movement is sticking to directing funds for the reconstruction of the Gaza Strip through its channels”, supplementing the missing part of the picture that the Head of the Political Bureau Ismail Haniyeh declared in his last speech when he said, “… by the efforts of the benevolent Arabs, we will work to reconstruct Gaza …”

The benevolent Arabs that Haniyeh is talking about are the ones whose photographs the supporters of Hamas had burned in some Arab capitals, that is, the Gulf states. These states’ rights were violated by the leaders of the Palestinian factions in Gaza after decades of financial and political support. These leaders gave credit for their achievements, if any, to Iran, which employed them in its expansion project and provided them with a few missiles to attack Israel whenever orders came from Tehran.

There is no doubt that the US administration’s position to “coordinate with the Gulf countries and donors to deliver funds through the United Nations and the Palestinian Authority to the affected people” is what Gaza really needs. This will happen only according to an international fund under the supervision of the United Nations so that the money does not go into the pockets of blood merchants in the Gaza Strip as usual.

The haters may have realized that there is no solution to the issue except through international peace references. Any disturbance in this matter will increase the burden of the problems that the sector suffers from, because the international community, which supports Israel’s right to defend itself, will neither allow these terrorist groups to lead the march nor obstruct it.

Therefore, all eyes have turned to Ramallah, where the internationally recognized authority will determine the direction that should be taken. It has expressed its position clearly through its Foreign Minister Riyad Al-Maliki who said, “The positions of the American administration come in the right direction and can be built upon. The Palestinian side is dealing positively with the American positions and tendencies to achieve peace according to international references, foremost of which is the two-state solution for peace”.

As per this fact, all of the Brotherhood’s remnants in the Arab countries, including Kuwait, should stop embarrassing their countries by deliberately pushing them to adopt extremist positions that affect their international relations, presenting themselves as supporters of terrorism, and calling for “no normalization of ties with Israel”.

The fact is that they are well aware normalization will happen inevitably, and whoever does not board this train will be trampled under the wheels of international ostracism and isolation.

In conclusion, the reconstruction of Gaza will not happen with Gulf money going into the pockets of the Hamas leaders to repeat the massacre that they recently committed in Gaza in a bid to raise the Arab shares of the Mullahs regime and the Muslim Brotherhood Group. It will go to the people of Gaza, who undoubtedly have today realized the extent of the terrible crime that Hamas has committed against them.

Share
Previous Decisions applicable to some people only!
Next 1,176 more infected with coronavirus 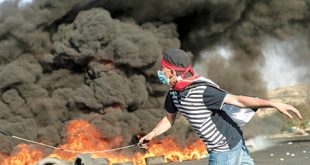 An explosion caused by Israeli airstrikes is seen from Hamas security building in Gaza City, …