ZURICH, Dec 16, (AP): FIFA filed court claims in Switzerland on Monday against Sepp Blatter and Michel Platini to recover more than $2 million from an irregular payment that led to both men being banned from international soccer.

FIFA said in a statement that any money recovered, plus interest, would be “fully channelled back into football development, which is where the money should have gone in the first place.”

Platini’s FIFA campaign was effectively ended when details of the payment emerged in September 2015 in fallout from American and Swiss federal investigations of international soccer. The former France great has consistently denied wrongdoing and said he paid taxes and social charges – potentially amounting to hundreds of thousands of Swiss francs – to Swiss authorities due on the FIFA payment.

Platini served a four-year ban confirmed by the Court of Arbitration for Sport. Blatter’s six-year ban expires in October 2021.

Any Platini comeback can be blocked by FIFA code of ethics rules, which require him to pay a fine of 60,000 Swiss francs ($61,000) imposed four years ago.

Platini has declined to pay while he is challenging his ban at the European Court of Human Rights in Strasbourg, France. Non-payment of any restitution ordered by a fresh Swiss court ruling could also delay his planned return to soccer.

“They (FIFA) will try to use what they want so that I don’t come back, I am sure,” Platini told The Associated Press in October.

Lawyers for Platini have also prepared a court filing in Switzerland against UEFA to receive up to one year’s payments potentially due in his former employment contract, worth 3 million Swiss francs ($3.05 million) in annual salary and bonus.

Soccer’s world governing body said in a statement Andrew Massey would join in March with the title “Director of Medical.”

Massey joined Liverpool in 2013. His new responsibilities include leading FIFA’s “medical and anti-doping team dealing with all matters relating to health in football.” 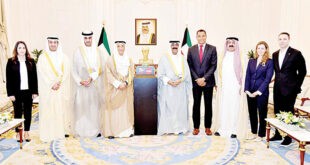 This post has been read 7475 times! GENEVA (AP) – FIFA president Gianni Infantino can …