LOS ANGELES, Nov 17, (RTRS): The “Fast and Furious” franchise may take a page from “Star Wars” and Marvel. Producer and star Vin Diesel tells Variety that the team behind the fast cars and criminals series is in the preliminary stages of developing prequels and spinoffs.

“We’ve written out story lines for various characters,” said Diesel. “We’ve been playing with it for a long time. It’s a very rich property and we’re committed to treating it with a lot of class.”

The actor did not say which characters would get their own standalone films, but in the past, Dwayne Johnson has hinted that he’d like to see his character, Diplomatic Security Service agent Luke Hobbs, branch out into independent adventures.

If the actors are game for some universe building it sounds like the studio is willing to back the projects. Universal Pictures Chairman Donna Langley confirmed that talks were taking place about ways to broaden the series’ reach.

“We’re certainly in conversations about how we can expand the franchise now,” said Langley. “It’s an ensemble cast and there’s room to bring characters in and out.”

If Universal does go forward with launching spinoffs and prequels, it will be aping a strategy successfully employed by the “Avengers” movies and one being embraced by “Star Wars,” which is augmenting a new trilogy with origin stories focused on Han Solo and others.

For now, however, the focus remains on creating three more “Fast and Furious” sequels. Diesel and Universal brass promise that the upcoming films will be different in tone from the adventures that preceded them. That’s why the studio brought in F. Gary Gray, the director of “Straight Outta Compton” to guide the eighth film in the series.

“We have a director who is going to bring the darkness out and bring out the character,” said Diesel, who promises that the film will be similar to his previous collaboration with the director, the gritty 2003 thriller “A Man Apart.”

The “Fast and Furious” films are known for their gravity-defying car races, but the studio wants to shift the emphasis in the next installment.

“You can’t keep having every movie have bigger and bigger stunts forever and ever and ever,” said Jeff Shell, chairman of Universal Filmed Entertainment Group. “Eventually you have to really focus on the story. We’ll still have big stunts but bringing in this amazing storyteller is going to be great.”

For his part, Gray says the series will be a departure from the rap epic he just finished making. “I’m a fan of the cars and the world and after being on ‘Straight’ for four years, it was time to have some fun,”

Shell admits that nothing lasts forever, but he believes that after more than a decade of movies, the success of the most recent chapter, “Furious 7,” indicates that the series is still growing its audience. It was the first film in the series to top $1 billion and benefited from the growth of foreign markets like China, where it made over $390 million.

“It’s at its peak now,” said Shell. “By the way, internationally something people forget is yes, this is ‘Furious 7,’ but probably half the people around the globe that saw ‘Furious 7’ hadn’t seen any of the other ‘Fast and Furious’ films in the theater. It’s new in China to them, it’s new in Russia to them, it’s new in most of Latin America, so this is a series that’s accelerating in my view, not slowing down.”

The most recent “Fast and Furious” film had added resonance to longtime fans of the series. Star Paul Walker was killed in an off-set car accident while production was taking place. In the wake of his death, Universal considered cancelling the film, before ultimately deciding to complete the project by relying on body doubles and digital effects.

“We would never have done this without all of Paul’s family agreeing,” said Ron Meyer, vice-chairman of NBCUniversal. “We would not have done it without everybody in the cast agreeing. We took great pains to make sure that before we said, ‘yes lets go forward with this film,’ we knew that we were doing the right thing. Not only because there was a big investment involved, but because a young man’s life had been lost and he had a daughter and friends and family.”

Diesel praises the Universal team for the restraint it showed in dealing with Walker’s death.

“They took such a high road and allowed us to honor our brother in such a powerful way,” said Diesel, who praises Meyer and Langley with allowing Walker’s character to ride off into the sunset instead of dying in the film. “Another studio couldn’t have helped themselves by exploiting that in the plot,” he said.

Meyer said that the script for “Furious 7” always depicted Walker’s character’s struggling to come to terms with the criminal life he led and voicing a desire to abandon heists to be with his family. Those themes allowed the filmmakers to send off Walker’s character in a more organic way, although Meyer acknowledges that future “Fast and Furious” movies will be quite different without the involvement of one of the key actors.

“Paul won’t be in it, but he’ll be represented in some form or another but whether his image is in it, I can’t tell you yet, but he won’t be in the film as a performer, as an actor, the way we did it last time,” said Meyer. “It will still be ‘Fast and Furious,’ it will just be without Paul.”

Diesel has said he believes there are three more “Fast and Furious” films left in him, but Universal brass hinted there might be some flexibility with that figure.

“Vin has a vision in his mind for three more, so let’s get three more done and then see where we are from there,” said Shell. “Everything has an end, so I don’t think our expectation is we’re going to have a hundred of them … To me ‘Fast and Furious’ has become no different than a beloved series that comes on every year.” 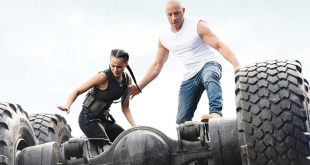