KUWAIT CITY, Feb 19: There are chances the amnesty that was given for the residence law violators to leave the country without paying fine or legalize their stay may be extended to another 30 days, reports Al- Anba quoting reliable Interior Ministry sources.

The 25-day amnesty ends in four days on Feb 22, 2018, and the daily quoting sources said the Deputy Prime Minister and Interior Minister Sheikh Khalid Al-Jarrah is studying the request in this regard. Meanwhile, the ports sector, under the supervision of the Assistant Undersecretary for Ports Affairs, Major-General Mansour Al-Awadhi and the General Administration of Airport Security are facilitating the exit of violators. About 50 expatriates who carry the travel ban were prevented from leaving the country because they had not checked with the General Department for Immigration Investigation to lift the travel ban on them.

According to the sources, about 30,000 of the approximately 150,000 illegal residents of all nationalities have taken advantage of the amnesty. The sources also said the Philippine embassy repatriates between 150 and 200 of its illegal citizens on a daily basis.

‘Grace’ at end despite airport closures 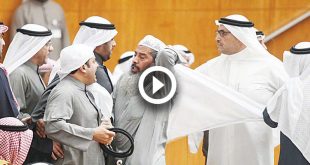