Extending visit visas and residence for another 3 months

KUWAIT CITY, Aug 25: On humanitarian grounds and due to exceptional cases of stranded expats the Ministry of Interior will extend residence and visit visa for a period of 3 months starting from September 1st. There will be no need for expatriates to review the residency departments, as their visas will be automatically renewed for everyone.

A security source said that the General Administration for Residency Affairs has submitted to the Deputy Prime Minister and Minister of Interior Anas Al-Saleh a letter (proposing) to renew all visits and residency for those who are inside Kuwait for a period of 3 months without paying any fines, it is likely that Al-Saleh will accept the letter and make amendments in accordance of public interest.

The sources said that the decision has been take to avoid crowding at residency affairs departments.

This is the second, as the Minister of Interior previously issued a decision to extend all visits and stays until the 31st of August, as thousands of them who had entered Kuwait commercial, family, or tourist, benefit from the extension, and they were unable to return due to airport were shut.

Share
Previous 477 recover from coronavirus; 613 new infections
Next Picking up and Dropping off Passengers at Kuwait International Airport 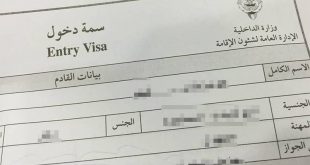 KUWAIT CITY, Aug 19: Instructions have been issued to stop converting visit visas of all …