KUWAIT CITY, May 15: Kuwaiti factory owners are still suffering from the consequences of waste export operations despite the existence of explicit government decisions in this regard that prevent the export of recyclable waste, reports Al-Anba daily.

This includes the decision issued by former Minister Dr. Abdullah Al-Salman on June 4, 2021 to regulate the export of waste. It prohibited the export of copper, scrap and crushed iron, aluminum, used oils, paper, plastic, glass, electronic waste and used batteries.

The decisions also include the recent decision No. 19/2022 issued by the Minister of Commerce and Industry Fahad Al-Shariaan that prohibits the export of iron scrap during the period from March 17 to June 17, 2022.

Despite the previous decisions, dealers and manufacturers affirmed to the daily that the door to exporting a lot of liquid and solid waste is still open, albeit partially or exceptionally. This is despite the Kuwaiti market’s need, especially in light of the current global conditions, for such waste, which is involved in many important industries, such as iron, copper, paper, cardboard, plastics and other local industries.

In this context, the CEO of the First Iron Industry Company Ahmed Al-Kharafi highlighted the Kuwaiti market’s need for all iron scrap waste of all kinds without exception.

At the same time, he said the current iron scrap waste is not sufficient to meet the needs of local factories, as evidenced by the fact that Kuwait imports hundreds of tons of iron waste annually so that Kuwaiti factories can operate at their maximum capacity.

Al-Kharafi explained that preventing the export of iron scrap would maintain the stability of iron prices in Kuwait, meet a percentage of the local market’s needs of iron, and limit the current price hike, especially after the prices of rebar (reinforcing steel bars) used in construction operations witnessed sharp increases recently in the local market as a result of the price hikes globally and the impact of the Russian-Ukrainian war.

Iron scrap is included in many industries, such as rebar and construction, consumer industries, air-conditioning industries, equipment, machinery, and others. Therefore, it is of great importance for any country in the world, especially for Kuwait, which is currently experiencing a huge urban movement, both at the level of government projects and new housing in the cities of Mutlaa, South Khaitan, and others, which will need thousands of tons of iron and various construction materials.

Al-Kharafi stressed the importance of activating decisions to prevent exports, similar to many countries around the world that issued decisions related to many food and consumer products and other decisions, especially since the whole world is living in exceptional circumstances that require them to preserve their basic resources to avoid any future problems.

Meanwhile, the Director General of United Paper Industries Nabil Al-Qenaie expressed his dissatisfaction with the continued export of waste abroad, despite the urgent need of the local market for these products.

He explained that the continued opening of the door for export caused a severe shortage of waste locally and a significant increase in the prices of these products, which disrupted the work of many factories. Some of them even stopped working at times, especially in light of the export of more than 6,000 tons of paper waste annually.

Al-Qenaie went on to explain that his company, which works in the field of carton manufacturing, has been suffering for a long time due to the export of waste paper and cardboard abroad, specifically to India, China and other countries that import these products for use in the production of white paper. These countries pay large sums to obtain waste papers and cardboard from the Kuwaiti market.

The high demand for recycled cardboard and paper has caused their local prices to rise from KD 17 to KD 90 per ton. This has negatively affected the prices of locally manufactured products, especially since Kuwait has two paper factories working to supply local companies with the quantities of cardboard and envelopes that they need.

The fair price of cardboard waste should not exceed KD 30 per ton, but it was due to the exploitation by some that caused the prices to rise. Some people defrauded this matter by using farms and groves as warehouses to collect paper and cardboard before exporting them abroad.

The scarcity of cardboard products, as well as their high prices, have prompted some to turn to “plastic” and “polyethylene” as an alternative to cardboard. However, this contradicts the global trend to preserve the environment, especially since cardboard is an environmentally friendly material unlike harmful plastic and polyethylene products.

The Public Authority for Industry affirmed that scrap is one of the most important sources for factories specialized in construction materials, which contributes to reducing the cost of the final product and thus reducing the selling price for the public.

It stressed the importance of implementing the decision to prevent the export of waste because of its great importance in supporting and strengthening local industries.

In an exclusive press statement, the authority highlighted that the Kuwaiti market is the first to recycle waste, iron scrap, copper, paper, plastic, and other recyclable waste, which is why it is being tightened by officials in the concerned government agencies to confront anyone who tries to circumvent government decisions that were issued as a basis for protecting the local industry, and contributes to serving the public and the economy. 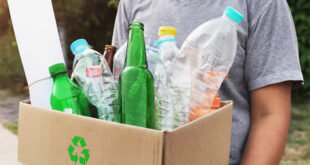 Recycled e-waste can be sold as iron, copper