BRUSSELS, June 30: Preparatory work is underway in the European Parliament for negotiations to start with the Council of Ministers on lifting of Schengen visa for Kuwaiti citizens, European Parliament sources said Thursday. EU ambassadors Wednesday approved the negotiating mandate for the EU Council of Ministers on the lifting of Schengen visa for Kuwait.

On the basis of this mandate, the Council which represents the 27 EU states, will start negotiations with the European Parliament. “At the moment, preparatory work is underway, but there isn’t yet a date for the next official steps. Most probably these will be discussed after the summer recess, when the Parliament’s legislative work continues on 29 August,” the sources told KUNA.

On the basis of this mandate, the EU presidency will start negotiations with the European Parliament, said an EU statement. Czech Republic takes over the rotating EU Presidency from France on July 1. The Council, which represents the 27 EU member states, confirmed the EU Commission’s proposal to provide for visa-free travel for the citizens of these two Gulf countries when travelling to the EU for a maximum duration of 90 days per 180-day period. “The Council thus took the first step towards visa liberalisation with Kuwait and Qatar, which should apply after the conclusion of bilateral agreements with these countries, in particular to ensure that full reciprocity of this exemption for EU citizens is maintained,” it noted. , (KUNA)

Share
Previous Two visa traders get jail in fraud, forgery
Next July 9 first day of Eid; prayer at 5:10 am 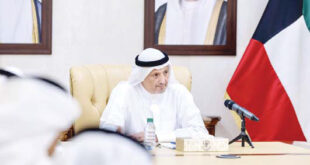