AT the beginning of the 21st century, I was invited, along with several human rights activists, to Bayan Palace to meet the late Sheikh Jaber Al-Ahmad. Sheikh Jaber arrived at the reception hall, and the invitees were allowed to enter one by one to greet him and thank him for his kind invitation.

When it was my turn for greetings, I had a short time for a quick conversation with the late Sheikh Jaber during which we laughed. When the reception ended, a number of the invited colleagues came to me with excessive curiosity, and asked about the conversation and the laugh I exchanged with Sheikh Jaber.
I replied that I asked him with a laugh, “What have you left for us after your call to give women their political rights for membership in the National Assembly and membership in the ministries?.
He laughed and asked me, “Did that proposition upset you?”, and I replied, “No, on the contrary, but you did not leave this issue of giving women their rights to us to raise it in our next proposals when we contest for the next National Assembly elections”.

I remembered that funny story when the social media broadcasted the voting session to give women their political rights and equality with men, when the late Sheikh Sabah Al-Ahmad was serving as the prime minister. The session was chaired by the late Jassem Al-Kharafi, and it ended with a vote to amend the law. On that day, women gained their political rights and became eligible to take up the post of minister. Our venerable colleague Masouma Al-Mubarak was appointed as the first minister, followed by the election of women as members of our National Assembly.

What saddened me was the audio-visual debate that took place and the tension that we saw among our brothers who are the representatives of the honorable tribes and external areas – as we call them – as they were desperately screaming, squawking, and trying to sabotage or disrupt the session so as not to pass that law complementing our shameful democracy.
I was also shocked when the representatives of the government and the MPs of the internal areas all voted for that law, with the exception of one vote by an MP of one of the most urbanized interior areas that were convinced by that amendment. That MP voted against the law to satisfy some of the fundamentalist forces we have been plagued with.

I am writing this article for my honorable women sisters and sisters, begging them to remember the dissonant voices that opposed giving them their political rights, and strived hard to not give them their electoral votes. However, our sisters hit them back twice as hard.
Dear sisters, they stood against realizing your rights … and now they beg for your votes. 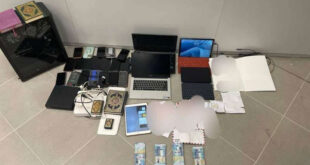 Not many fingers will likely remain

Ex-MPs lash out at those who ate their words

Participatory train takes off! – ‘Be realistic’