According to Al-Ghanim, His Highness the Deputy Amir believes in constitutional institutions and emphasized the importance of maintaining the stability of the State in light of the current political, economic and health conditions in the region and throughout the world. He disclosed His Highness the Deputy Amir also underscored the importance of cooperation between the government and Assembly, while urging the MPs to use their constitutional tools responsibly and that they should consider the current situation whenever they use these tools.

Grilling
He also confirmed meeting His Highness the Prime Minister Sheikh Sabah Al-Khaled, affirming the Premier is not upset about the grilling motions and that he is ready for such motions. He pointed out the Constitution provides tools for the MPs whose performance is evaluated by citizens who have the right to question the lawmakers.

He also clarified that the rumors about dissolving the Assembly have become common, indicating such rumors have been spreading since the beginning of this parliamentary term in 2016. He said only a short period is left in this parliamentary term and this little time should be utilized properly to complete as many bills as possible. He concluded the press conference by imploring Allah to bless HH the Amir with speedy recovery and safe homecoming. In another development, MP Abdulkareem Al-Kandari intends to discuss the grilling of HH the Prime Minister in the session slated for Wednesday.

He said he will ask the Premier to stand on the grilling podium in order to respond to the interpellation points. He explained the Premier’s grilling will be discussed on Wednesday as Tuesday’s session is for the grilling of Deputy Prime Minister and Minister of Interior Anas Al-Saleh, in addition to the two grilling motions against Minister of Education and Higher Education Dr Saud Al-Harbi. Meanwhile, MP Muhammad Al-Dallal submitted a proposal for the Council of Ministers to establish an institution tasked to conduct futuristic and strategic studies on the important issues in various fields.

He went on to say that the proposed institution will regularly submit reports to the legislative and executive authorities, indicating these reports must include achievements and plans. He added these reports will be available for citizens in line with the principle of transparency. He disclosed that the proposed institution will receive requests from the government and Assembly to conduct the required studies.

Online
On the other hand, MP Osama Al-Shaheen submitted a proposal for the government to issue a decision on making online work permanent. He recommended that only 50 percent of the total number of employees in public institutions and ministries should report for work and the other 50 percent must work from home.

He asked the government to assign the Civil Service Commission (CSC) to implement a new mechanism for the work timings of employees, while those engaged in special nature jobs like those in the health and security sectors will be exempted from this mechanism. He said the 50 percent of employees working from home can be increased later, adding that such a step will have a positive impact on many fields like traffic. He asserted this will also reduce the operating cost and consumption of electricity and water in public institutions.

Moreover, MP Muhmmad Al-Dallal forwarded queries to Minister of Finance Barrak Al- Shitan about the public budget for fiscal 2020/2021. He pointed out an estimated budget of KD22.5 billion, which was referred to the Assembly in January 2020, was divided as follows: 71 percent for salaries and subsidies, 16 percent for capital projects and 13 percent for other expenditures.

He wants to know how the salaries and subsidies were calculated to be 71 percent of the budget despite the fact that this item is estimated at KD7 billion — 30 percent only, in addition to the capital projects and expected revenues. He said the Cabinet issued a decision to reduce the budget for different public institutions by 20 percent. He wants to know the expenditures which will be included in the 20 percent reduction, if the government carried out a reconstruction process to remove some projects from the budget, and details about these projects. 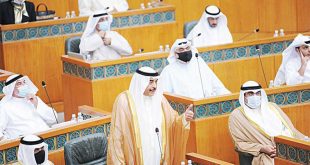