CAN the Lebanese believe that the political class, which is dictating their destinies, is seeking to form a government to rescue Lebanon from collapse and eject it out of the hell that its president foretold about?

Do about six million people think that the murderers drenched with their blood and power are interested in changing the situation for the better?

It is a country that witnessed three of the highest non-nuclear explosions in the world through which half of the capital city was ruined and its most important port was wrecked. So far, the investigations haven’t revealed anything substantial about those responsible for such a disaster. This is due to the sectarian and partisan political game, and it makes us wonder if there can be a minimum level of conscience among the criminals.

These are the questions posed by Arabs and the international community, not just the Lebanese. For those looking for the answers, it will be like searching in the dark for a needle in a haystack.

Hence, there are those who are asking – When will the hungry unite against the political class that insists on humiliating them? Is there a sectarian devil in every one of them or blind partisan loyalty that is superior to the deprivation and the systematic impoverishment practiced on them and that prevents them from hearing the voice of the few rational people who still seek to prevent the collapse of the country?

This matter seems difficult to achieve but it is not impossible in a country like Lebanon where false slogans outweigh the facts, misinformation and partisan employment over the fates of people, such that everything that happens from October 17, 2019 to today is nothing more than scenarios created by the demons of politics and money from parties and sects.

All of them, without exception, aim to distribute the roles of aborting a revolution that they know will topple them all if it is possible for it to escape from the corridors of partisan employment.

The Lebanese had never gone through such a crisis for a century. Even at the height of the civil war, there was hope among its various components to get out of the disease of war, ecover by treating the country with full disclosure and openness, and escape from the tunnels of conflict and division.

This was necessary in order to have an opportunity to rebuild the country, perhaps different from what was there before, and recover from the negative effects of a worn-out sectarian formula. However, all of this fell into a quagmire that distributes interests among small players. No matter how big they inflate their size, they remain mere puppets, as they are moved by either the outside forces such as Hassan Nasrallah and his party, or selfish ambitions as is the case with the rest of the politicians.

Everything that is currently happening in Lebanon is arranged and decreed in the rooms of the Lebanese mafia and militia system.

Indeed, this criminal system is responsible for transforming Lebanon into a dumping ground for all gangs’ dirt. All of the Lebanese should not fall for the lie of international intervention, and the pressure imposed by the American, the French and others. This lie is being promoted by someone who seeks tourism in Arab blood from Syria and Iraq, and even Yemen.

The people in charge of Lebanon today do not want strong government institutions, but rather sectarian farms … so do not be deceived by the harsh statements of the President of the Republic against the appointed Prime Minister, or the latter’s response to it, all of which have been arranged in advance, and are calculated by words and punctuations, as well as the speech of Nasrallah through which he hinted that the civil war is part of this game, and also the responses to that speech, as they are all among the tools of the game. 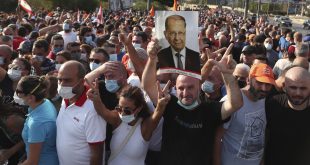 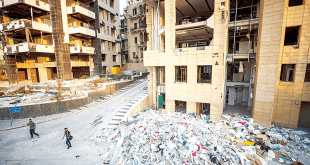