KUWAIT CITY, Feb 6: With the cooperation of the government and the National Assembly, and under direct orders from the Minister of Public Works, Dr Rana Al-Faris and the Kuwait Municipality, work began on the demolition of the metal company site in the South Saad Al-Abdullah housing project. In this regard, MP Fayez Al-Jamhour said the wall of influence has finally been torn down at the expense of the citizens’ housing.

He thanked the members of the Housing Committee of the National Assembly, the Municipality and the concerned ministers saying that “we will not rest until all the remaining obstacles in the region are removed.”

Member of the Municipal Council, Fahid Al-Muwaisari, said: “We are still with the citizens’ demands regarding housing rights first and foremost, and today we are following up and supervising the removal of the metal company in South Saad Al-Abdullah Housing Project.” 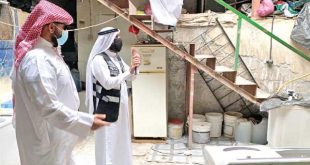