BEHROR, India, Nov 6, (RTRS): The beating that ended Pehlu Khan’s life was televised nationwide. Cellphone video captured a group of men punching and slinging Khan around the middle of a road in north India, stomping on him and then slamming the 55-yearold farmer down on concrete as he begged for mercy. Khan had been stopped by the lynch mob of rightwing Hindus as he rode home from a market in April with two cows and two calves in the back of a truck.

The crowd was furious at the sight of a Muslim transporting animals held sacred by Hindus, according to the accounts of his sons and two fellow villagers who were also attacked. Before the men beat Khan so badly that he later died, breaking his ribs in multiple places, they screamed that he was planning to slaughter the cattle for beef.

Outside the frame of the video, something else was happening: Pehlu Khan’s cows were seized. They were hauled off to a nearby Hindu-run shelter that takes in cattle snatched from Muslims and sells them.

Assaults meted out in broad daylight against India’s Muslim population, some 14 percent of the country’s 1.3 billion people, have sparked concern about the direction the country is taking under Hindu nationalist Prime Minister Narendra Modi.

There has been another, less noted dimension to the violence: The theft from Muslims and redistribution to Hindus of cows that provide crucial income in the Indian countryside. Such scenes clash with India’s image as an investor darling in Asia and the pro-business message Modi broadcasts to foreign investors. But three and a half years after his electoral victory, the cow seizures illustrate how the nation’s right-wing Hindu factions that propelled Modi to power are now shaping India and stirring religious upheaval.

Having stoked Hindu nationalist passions in his bid for the highest office, it’s unclear to what extent Modi can now control them. The bands of right-wing Hindus who seize the cows are operating essentially as private militias. They are undeterred by the prime minister’s public calls on them to end the violence. States governed by Modi’s party have seen a marked increase in cow theft from Muslims as well as funding for cow shelters that in many cases take in the stolen cattle.

Impatience
Interviews with nationalist Hindu leaders and militia members across the country reveal an impatience for Muslims to demonstrate obeisance to the Hindu majority. There are no official statistics for how many cows have been stolen from Muslims in incidents involving such groups since Modi’s Bharatiya Janata Party (BJP) came to national power in 2014.

Reuters’ reporting across India, though, puts actual numbers on the extent of the cow theft. It also provides the first in-depth look at how the actions of cow vigilantes are leading to further economic marginalization of the country’s Muslim minority. In northern India, the leadership of just two of the main organizations of “gau rakshaks” — right-wing Hindu cow vigilantes, or literally “cow protectors” — said they have taken about 190,000 cows since the year of Modi’s election, some in the presence of police and almost every single one of them from Muslims, the reporting shows. Separately, Reuters surveyed 110 cow shelters or farms, known as “gaushalas,” across six Indian states that were led by BJP chief ministers from before or just after Modi’s 2014 election win.

The survey found an increase of 50 percent in their cattle holdings — from about 84,000 head before Modi came to power in 2014 to more than 126,000 today. The survey, conducted by phone and in person, covered a fraction of the thousands of cow sheds nationwide. It was not possible to determine how much of the 50 percent increase was due to cow vigilantes, because record-keeping in many cases is non-existent. But of the 110 cattle facilities surveyed, all but 14 said they receive cows from the Hindu vigilante groups. About a third said they sell or give cows away, nearly all to Hindu farmers and households.

In a separate survey, Reuters found that only three of 24 cow facilities in four states not ruled by a BJP chief minister said they sold or gave away cattle — mainly to Hindus — after receiving them. While cattle stock has risen about 40 percent in these gaushalas since Modi took office, only a small part of the increase was due to vigilantes. In many of the cases, cows were donated to the shelters for religious reasons or purchased from cattle markets for fear they would be slaughtered.

Rural
It is hard to put a value on the seized cattle because the price of cows ranges from zero for animals near death to 25,000 rupees (about $385), if not more, at cattle markets for healthy milk cows. But taking the average of those two points, just the 190,000 cows captured by the two vigilante groups in northern India would be worth more than $36 million.

That is a significant amount of money in India, where some 270 million people live on less than $1.90 a day. In rural areas, home to about 70 percent of the nation’s population, a family’s milk cow is often its most valuable possession.

Cow slaughter is illegal in most of India, while committing cruelty to cattle by transporting them crammed into small spaces is outlawed across the country. Slaughtering buffalo, an animal not considered holy, is allowed, fueling a multi-billion dollar meat export industry that is dominated by Muslims. Penalties for killing a cow differ from state to state, with most ranging from six months to five years in prison.

The fatal assault on Pehlu Khan unfolded among the rolling hills of India’s northwestern Rajasthan state. Travelling with his two adult sons in a rented truck, Khan was headed home to the village of Jaisinghpur in the neighboring state of Haryana. He’d borrowed 40,000 rupees (about $620) to add to cash he’d cobbled together to buy the cows. His four animals were among 32 other cattle seized on April 1 at makeshift roadblocks near the town of Behror.

A day after the attack on Khan and his two sons, police began an investigation against them under a state law barring cow slaughter. On April 3, Khan died. In its April 18 order following a bail hearing for the sons, a local court noted that the Khan family, found lying injured on the ground, was unable to produce a waybill showing they’d legally purchased the animals. Also, the cows were bound together at the mouth and, the judge noted, “our society does not allow animals to be treated in an inhumane way.” 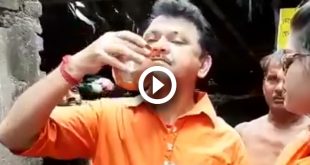 Kuala Lumpur, April 5, 2018 (AFP) -Cows in a conservative Malaysian state could be played …