KUWAIT CITY, Nov 1: The Court of Appeals upheld the verdict issued by the Court of First Instance which sentenced one of the convicts in the “Abdali Cell” case to ten-year imprisonment with hard labor over charges of the defendant being a member of Hezbollah. The court also decided to return the case to the Court of First Instance for ruling on allegations of receiving weapon-training in the camps of Hezbollah, reports Al- Seyassah daily.

Earlier, the Criminal Court had cancelled the sentenced issued in absentia that sentenced the convict to 15-year imprisonment based on allegations of having secret links with Iran. The court was not convinced by the testimony of the concerned State Security officer, but was convinced by other allegations such as his membership with Hezbollah and possession of weapons. Meanwhile, the Court of Appeals also upheld the verdict issued by the Court of First Instance which sentenced a Kuwaiti citizen to a jail term of three years and six months based on a State Security case filed against him for posting statements deemed offensive to the Amiri entity. 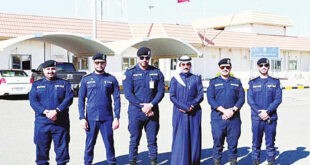 This post has been read 9686 times!KUWAIT CITY, Feb 14: The Criminal Court of Appeals …