KUWAIT CITY, March 3: The Court of Appeal upheld the First Instance Court’s ruling that acquitted a citizen with felony record after he was charged for possessing psychotropic substances for the purpose of trafficking.

The court thereby acquitted him on grounds that the prosecution failed to present substantial evidence to prove he had actually committed the felony in question.

The case file indicated the Public Prosecution leveled against the citizen charges of obtaining and possessing the psychotropic substance “methamphetamine”, which he intended to traffic without legal authorization.

The First Instance Court sentenced him to five years in prison with hard labor based on his felony record of robbery with violence. The defendant was arrested after a police officer on patrol spotted his vehicle parked on the shoulder of the road with tools for administering narcotics beside him, while he failed to produce his identification document.

The officer ordered the defendant to step out of his vehicle. To his surprise, he got out and tried to flee the scene but the officer caught up with him. Upon conducting the precautionary search on the suspect and his vehicle, the officer found narcotic pills.

Representing the defendant, Attorney Essa Al-Hureibi argued that the arrest and search of his client was done illegally, and that the prosecution failed to present substantial evidence to prove that his client actually possessed the confiscated narcotics, let alone peddling in them. Also, his client wasn’t arrested while buying or selling or marketing narcotics to others, the attorney argued. 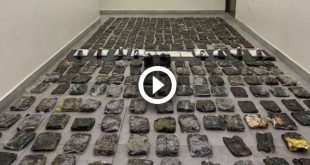