KUWAIT CITY, Sept 5: The Interior Ministry has been in a state of extreme confusion over the past 24 hours after Deputy Prime Minister and Minister of Interior Lt-Gen Sheikh Khalid Al-Jarrah adopted a decision of the security committee which he had set up to look into the grievances and appointments made since the beginning of this year, reports Al-Qabas daily.

The adoption of the decision ended in the cancellation of all those who were promoted from directors of departments and now they will work in the capacity of acting directors until things are put in the right perspective.

Al-Jarrah had also cancelled the appointments of department heads but only three hours later he reversed that decision after a series of counter-pressures. Informed sources said that the interrogation by MP Riyadh Al-Adsani was the cause of confusion in the Interior Ministry because it mentioned about appointments and mistakes that may have taken place. 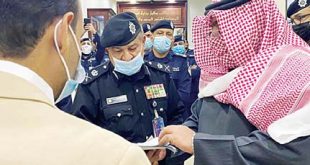