VIERNHEIM, Germany, June 23, (AFP): A masked and armed man barricaded himself in a German multiplex cinema with dozens of people inside Thursday before being killed by police, officials said.

No hostages were injured at the complex in the western town of Viernheim, 75 kms (50 miles) south of Frankfurt, Hesse state interior minister Peter Beuth said. “The assailant moved through the cinema complex, according to the information we have now, and appeared confused,” he said. “There were hostages inside and there was a struggle (with police) until in the end he was dead.”

Beuth added: “We have no information that anyone (among the cinema-goers) was injured.” A police spokeswoman in the nearby city of Darmstadt confirmed that “all the hostages were unhurt and led out of the building”. Initial reports had referred to dozens of wounded people and several shots fired, and police dispatched heavily armed special units to the site equipped with helmets and bulletproof vests. “There was an acute threat situation,” Viernheim police said in a statement.

Later accounts said that several people had been hurt by tear gas during the police raid but this was also denied. Authorities said they had no information on the man’s identity or motive. Media reports said they saw the gunman enter the building with “an ammunition belt” draped over his shoulder. “I saw that something was happening. I called the police and told them to come immediately,” the cinema manager told Bild daily without giving her name. “We received a call at 2:45 pm (1245 GMT) saying that a man had stormed” the cinema, Beuth said. “Four gunshots were reported.” At 6:15 pm (1615 GMT), police began withdrawing from the scene, an AFP photographer saw.

Security sources quoted by DPA news agency said there was “no link to terrorism”, after deadly attacks in cities including Paris, Brussels and Istanbul have left European authorities on edge. The Darmstadt police spokeswoman said they were investigating what type of weapon the assailant used, adding that it was possible it fired blanks.

Mass shootings are relatively rare in Germany where gun ownership is prevalent but firearm sales and storage are subject to strict regulation. In the worse case in recent years, 17-yearold Tim Kretschmer went on a rampage with his father’s gun at his former school in 2009, killing 15 people before turning the weapon on himself. 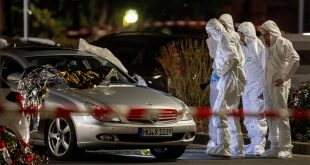