KUWAIT CITY, Dec 4: According to informed sources, the Central Bank of Kuwait has refused to grant each bank individual permission to amend its statute in a manner that allows it to distribute quarterly profits at quarterly or half-yearly terms, reports Al- Rai daily. They explained that the position of the supervisory regulator in this regard does not mean its rejection of the idea, but rather it is an attempt to regulate it for all banks simultaneously and comprehensively, not separately. The Central Bank recently noticed the movement of banking officials towards the Ministry of Commerce and Industry and the Capital Markets Authority to obtain approval, which guarantees their bank in distributing profits on various terms.

The point of view of the Central Bank’s officials is that this procedure should not be allowed in a separate banking manner. It should come within an organized supervisory decision for all banks that wish to distribute quarterly profits. This requires firstly to prepare a supervisory study that guarantees the provision of controls. The sources suggested that the Central Bank or the Capital Markets Authority, and the Ministry of Commerce and Industry would not object to the banks distributing quarterly profits, especially since this practice is already applied. One of the examples of this locally is the Zain Company. Regarding the objectives of these standards, the sources explained that the Central Bank seeks to provide guarantees that the bank’s recorded profits are accurate and in accordance with the generally accepted accounting principles. The interim distribution should not affect the paid capital, and the bank’s strength and plans, and the ways to make optimal use of them. The distribution should not exceed a certain percentage agreed upon from the total capital. The Kuwaiti banks’ efforts to implement this amendment reflects their strong financial mantle and their ability to approve quarterly distributions without any negative impact on their other expansion plans, either credit or investment.

However, this step must be framed by supervisory procedures for all banks, so that those on whom these controls apply may distribute quarterly profits in the future if he decides to do so. The controls for the banks’ distribution of quarterly profits are currently being prepared with the same efficiency that makes it approve the annual distribution. In the event of obtaining the supervisory approval to amend the banking model used for distributing profits, and replacing it with one that approves the adoption of quarterly distributions instead of annual, it will require the banks to separately hold a general assembly to discuss the proposal of the board of directors and obtain the approval of the extraordinary general assembly to amend the articles of association to the bank.

It is noteworthy that one of the most prominent advantages of the quarterly distribution of banks is that it gives confidence to the investor of the fact that the bank that adopts this behavior has quarterly revenues and cash flows and no unrealized revenues (book profits). It also enhances the bank’s strength by achieving the expected results, which reflect the financial strength of the distributor, and its positive view of the development of its financial operations, as it relies on its expectations on the continuous healthy growth of its operations, and the prospective investment opportunities. Moreover, this procedure enhances what is known in the market as repurchase, that is, it gives a greater opportunity for shareholders to reinject their dues from the cash dividend in expanding their holdings of the shares of the bank in which they contribute. It is also considered one of the contributing factors to the increase in the share price. 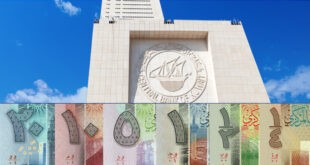