KUWAIT, Oct 26: The Kuwaiti cabinet, during its weekly meeting at Seif Palace on Monday, congratulated His Highness the Amir and His Highness the Crown Prince as well as Kuwaiti people and the Muslim nation on occasion of the Prophet’s (PBUH) Birthday, due to fall on Thursday.

The cabinet members reviewed the guidelines, set forth by His Highness the Amir Sheikh Nawaf Al-Ahmad Al-Jaber Al-Sabah in his address to the last session of the outgoing (the 15th) National Assembly last Tuesday.

The Amiri speech reaffirmed commitment to the democratic course of the Kuwaiti people, and protection of the national unity and the fundamentals of the country’s foreign policy charted by His Highness the late Amir Sheikh Sabah Al-Ahmad Al-Jaber Al-Sabah, said Deputy Prime Minister, Minister of Interior and Minister of State for Cabinet Affairs Anas Khaled Al-Saleh following the meeting.

The cabinet members commended “the tremendous efforts” being made by the various state departments and civil society to combat the outbreak of the novel coronavirus (Covid-19) pandemic in the country.

The cabinet members were briefed about the resignation of Minister of Information and Minister of State for Youth Affair Mohammad Nasser Al-Jabri.

Deputy Prime Minister, Minister of Interior and Minister of State for Cabinet Affairs Anas Al-Saleh made a presentation on the efforts underway to set the stage for the legislative elections, including the registration of candidates and how to guard against the spread of Covid-19 during the electoral process.

Minister of Health Sheikh Dr. Basil Al-Sabah made a presentation about the latest statistics relating to Covid-19 inside and outside Kuwait as well as the preventive measures to face up to the second wave of the pandemic.
He also briefed the cabinet on the efforts of his ministry to ensure provision of vaccines against the viral illness and the formation of an interagency committee to supervise the operation of a mechanism for vaccination in keeping with the health safeguards.

The committee, chaired by Sheikh Dr. Basil, includes representatives of the Ministry of Interior, the Secretariat of the Cabinet, the Public Authority for Civil Information (PACI) and the Central Agency for Information Technology (CAIT).

Minister of Public Works and Minister of State for Housing Affairs Dr. Rana Al-Fares and leaders of the her ministry and the Public Authority for Roads and Transportation (PART) also made online presentations on the preparations for rain season and the precautions against traffic jams, in collaboration with 16 state bodies including a geological team.

The cabinet heard a presentation by CAIT’s Director-General Haya Al-Wad’ani on the progress made in leveraging KuwaitApp and Shal across the government services to ensure easy access to the services and promote e-government.

Regarding the latest developments on the regional and international situations, the cabinet expressed resentment at the continued publication of cartoons offending Prophet Mohammad (PBUH).

The cabinet echoed the statement of the Organization of Islamic Cooperation (OIC) denouncing such cartoons and all slanderous acts against holy faith or religious icons.

The cabinet members welcomed the signing by the Libyan parties of ceasefire agreement at the end of the fourth UN-sponsored session of the joint military commission held in Geneva on October 19-23.

They voiced hope for success of the efforts of the UN envoy to Libya and all stakeholders to reach a political solution to conflict, restore security and stability in the country, and realize the aspirations of the brotherly people of Libya.

They also hailed the truce deal reached by Azerbaijan and Armenia and the efforts recently made by the United States to deescalate the conflict in disputed Nagorno-Karabakh region.

They expressed hope that the two countries would be able to reach a political settlement to the dispute and restore security, stability and peace in the region.

The cabinet members strongly denounced the continued attacks by the Yemeni Houthi militia against civilian targets in the southern parts of the sisterly Kingdom of Saudi Arabia.

The persistence of such drone and missile attacks runs counter to the rules of international law and norms and undermines the security of the entire region, thus necessitating an immediate international response, the cabinet stressed, renewing Kuwait’s support to Saudi Arabia in all acts it might take to protect its security and stability.

The cabinet condemned the recent terrorist attack on an educational center in Afghanistan which left scores of casualties.

Expressing condolences for the families of the victims, the cabinet reaffirmed Kuwait’s solidarity with the Republic of Afghanistan in its fight against terrorism.(KUNA)

Share
Previous Election campaign activities could lead to imposing of a partial curfew
Next ‘Rebecca,’ not a Hitchcock picture 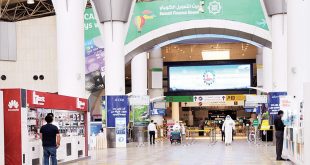