After the meeting, Deputy Prime Minister, Minister of Interior and Minister of State for Cabinet Affairs Anas Al-Saleh stated the following in regard to the proceedings of the meeting.

His Highness the Prime Minister briefed the cabinet at the beginning of the meeting on the improvement of His Highness the Amir’s health, expressing best wishes and hopes for a speedy recovery.

Based on a previous order by His Highness the Amir, the cabinet was briefed on a decision made by the municipal council in naming the Seventh Ring Road after Late Sultan of Oman Qaboos bin Saeed in appreciation of his important roles and efforts to support the Gulf Cooperation Council (GCC), and the Arab and Islamic causes.

In implementation of the directives of His Highness Deputy Amir and the Crown Prince Sheikh Nawaf Al-Ahmad Al-Jaber Al-Sabah in his recent address to the nation, the cabinet approved the formation of five expert teams to help government agencies improve handling of the following dossiers: the government cooperation with the National Assembly, combating corruption, reforming the economy, addressing demographic imbalances and social media challenges.

Later, Minister of Health, Sheikh Dr. Bassel Al-Sabah, briefed the cabinet on the latest heath developments in the country in light of the statistics and data related to the numbers of coronavirus cases of infection, recovery, deaths and those receiving treatment.

He pointed out that that the recovery rate has increased whereas fatalities and hospitalizations have went down.
The council also followed up on the latest developments on the curative and preventive levels and logistical services related to efforts to combat the spread of the coronavirus.

The cabinet underlined the importance to maintain compliance with health guidelines, despite the end of the partial curfew across Kuwait, which was lifted on Sunday, in order to ensure success in the coming weeks.
In this regard, the cabinet thanked all citizens and residents for their commitment to the preventive measures, but it called on all to continue their adherence to physical and social distancing rules and wearing facemasks to prevent the spread of infection.

It praised the security measures taken to implement the curfew, expressing its deep thanks and appreciation to all employees of the Ministry of Interior, the National Guard, and the Kuwaiti Army for their sincere efforts around the clock which contributed to the overall success.

On another front, Minister of Finance Barrak Al-Sheetan along with senior officials in the Ministry of Finance and the Kuwait Investment Authority made a presentation on the financial situation of the country based on the statistics of last fiscal year, which ended on March 31 2020.

The cabinet also decided to asked the minister of finance to refer all these data and reports to the National Assembly.
It hailed the efforts of the Ministry of Finance and the Kuwait Investment Authority to preserve and develop public funds, expressing satisfaction about the strength of the financial situation of the state.

The cabinet also studied the cabinet’s Legal Affairs Committee’s proposed draft law on limiting the right to import goods on those who have relevant licenses from the Ministry of Commerce and Industry and are registered in the Commercial Registry.

The cabinet reviewed a draft law for amending some provisions of Decree Law No. (67) of 1976 on traffic regulation to increase traffic violation penalties and fines.

It also discussed a draft law to encourage local banks to offer required finance to clients affected by the coronavirus crisis.
The cabinet mulled a bill ratifying the Arab treaty for banning human cloning.

It approved all the draft laws and referred them to His Highness the Deputy Amir and Crown Prince to refer it to the National Assembly.
The cabinet thoroughly studied the two grilling motions filed by two lawmakers against His Highness the Prime Minister Sheikh Sabah Al-Khaled.

It pointed out that the two motions will be put on the agenda of the coming National Assembly session.
Finally, the cabinet was briefed by Minister of Education and Minister of Higher Education Saud Al-Harbi about the grilling motions filed against him by two lawmakers.
Al-Harbi expressed readiness to walk up to the podium and answer the questions of the lawmakers on Tuesday’s National Assembly session. (KUNA) 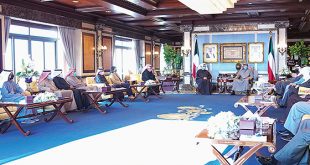 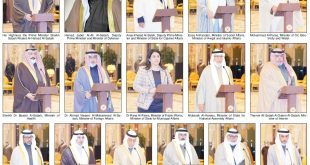