KUWAIT CITY, Nov 22: MP Osama Al-Menawer submitted a bill on nationalizing jobs in Kuwaiti embassies and consulates. According to the bill, the contracts that the Civil Service Commission (CSC), Ministry of Foreign Affairs and other public institutions signed with foreign employees at the Kuwaiti embassies and consulates will be terminated within six months after the ratification of this bill or once the contracts end, whichever comes earlier. The CSC will then advertise the vacancies for citizens to apply.

In case none of the national applicants is qualified, the CSC will organize training courses for the citizens to qualify them for the vacant posts. Hiring expatriate employees is allowed only on temporary basis, if none of the national applicants is qualified for the vacant post. MP Ahmed Al-Hamad submitted a bill on amending Civil Code No. 67/1980 in order to add a paragraph to the first item of Article 581 stating that in case the concerned authorities suspend work in public institutions to protect public health or national security and this decision results in the closure of a rented shop or facility, the tenant is exempted from paying rent unless the tenant decides to close the facility on his own. MPs Abdulaziz Al-Saqaabi, Thamer Al- Suwait, Khalid Al-Otaibi, Hamdan Al-Azmi and Mubarak Al-Hajraf submitted a bill to establish a zone for medical equipment and drug industries named ‘Dawacon’, which means ‘Your Medicine’.

The Public Authority for Industry (PAI) will prepare the required infrastructure, in cooperation with the concerned institutions and private companies. PAI will allocate plots for the project, including spaces for the establishment of stores. It will also float tenders to the manufacturers of medicines and medical equipment. Five percent of the zone will be allocated for the owners of small and medium enterprises (SMEs) who want to invest in Dawacon. A shareholding company will be established within one year and 24 percent of the shares will be allocated for public institutions, 50 percent for the citizens, and 26 percent will be sold to local and international companies through public auction. By Saeed Mahmoud Saleh Arab Times Staff 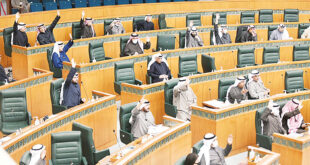