THE German Chancellor Angela Merkel supposedly once said, “In India and China, there are more than 150 gods and 800 different beliefs. Yet they live in peace with each other. However, Muslims have one God, one prophet, and one book, but their streets are colored with blood, and both the killers and their victims say the same thing – Allah is great.”

This fact prompts us to refer to the reasons that led the Arab world to drown in a sea of blood. This happened since the fall of the Ottoman Empire and the success of the Sykes-Picot Agreement, which paved the way for planting sectarian, creedal and ethnic mines among the components of a single state. It also led to the installment of Israel in Palestine. All these factors have changed the paths of new developmental countries politically, economically and socially.

What is happening in the Arab world today is a replica of what happened in medieval Europe, starting from the civil wars between the Christian sects, and the disintegration of states, until the rise of the industrial revolution. This changed the mood of the people, and forced the ruling elites to pay attention to the fact that their continuation in conflicts plunges their people into backwardness, poverty and famine.

At that time, the need arose to transfer the conflict to the outside by fueling the call to liberate the tomb of Christ, as was commonly known in the tenth century and continued until the end of the Ottoman Empire.

In addition to that, Europe had established its colonial project based on the British principle of “divide and rule”, which it considered as the best solution to control the people of the Middle East. After the emergence of Israel, this assumption was reinforced by dividing the Arabs further and pushing for military coups.

This came into effect after the demons of intelligence in France and Britain became aware of the fact that the democracies that began in modern countries will lead to the dismantling of these mines, and the emergence of an independent and homogeneous Arab force culturally, religiously, economically and politically.

In this context, the truth imposes a return to the late 1970s when the West decided to pull the rug from under the Iranian peacock Shah Muhammad Reza Pahlavi as punishment for his decision to leave the “Western house of obedience”. The alternative was prepared by then, namely Ayatollah Khomeini and the extremist political line he represented which was an extension of the Safavid line in the 16th century that ruled Iran with iron and fire and allied with the European Crusaders against the Ottoman Empire.

After the failure of the Iranian project, another one was adopted – Creative Chaos and the New Middle East. This was promoted by the then US Secretary of State Condoleezza Rice and her successor Hillary Clinton. It also emerged as a part of Barack Obama’s seditious scheme to provoke unrest in the Arabian Peninsula and topple its regimes in preparation for Iran’s control and spread of Shiism.

The second part of the plan was to give control of the Arab North Africa to the Muslim Brotherhood Group, which was evident in the events that followed the January 25, 2011 in Egypt, the Brotherhood’s hijack of power, and its attempt to extend its influence over Tunisia, Algeria, Libya, Morocco and Mauritania. However, the mighty Egyptian people thwarted all of that with the uprising of June 30, 2013.

On the other side of the Arab world, Iran has failed to seize control of the Arabian Peninsula. Its project in Syria, Lebanon, Iraq and Yemen has faltered. Indeed, the magic has turned against the magician. It is threatened with division, as the current Balochi uprising began to take a great momentum, as well as the Ahwazi uprising, which has continued for years. These are preludes to the division of Iran into five regions based on the ethnic minorities present in them.

This experiment is today in front of the American Democratic administration, which must abandon the narrow electoral calculations and its disagreement with Trump, and benefit from the positives left by the previous administration in the Arab world. The latter had ended seventy years of futile wars with Israel, and opened wide horizons for Arab cooperation with it away from the fear of normalization, which was portrayed as a bogeyman that would lead the Jews to swallow the Arabs.

The fact that must be taken into account is that the Jews did not convert the Arabs, but rather that the Mullahs of Iran are seeking to convert the region to Shi’ism … This will definitely not happen.

Sunni Islam has proven to be more capable to adapt to the times and is more powerful than any attempts to change its belief. We in the Kingdom of Saudi Arabia have the best example.

Until a few years ago, Saudi Arabia was considered as a bad and extremist model of Islam, but its youth realized that they were the victims of a brainwashing game played by dark groups. Today it is setting an example of civilized development and modernization. 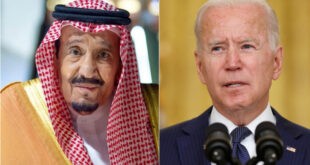