MOUNT MAUNGANUI, New Zealand, Jan 5, (AP): Fast bowler Ebadot Hossain took a career-best 6-46 as Bangladesh beat World Test Champion New Zealand by eight wickets in the first cricket test Wednesday, capturing its first-ever win in New Zealand. Ebadot had bowled Bangladesh to the brink of a famous victory by the end of the fourth day when he had figures of 4-39. He broke down the last of New Zealand’s resistance with two quick wickets as the home team was dismissed in its second innings for 169, its lowest score against Bangladesh. New Zealand trailed by 130 runs on the first innings, leaving Bangladesh to score only 40 for victory. It lost two wickets in doing so but current captain Mominul Haque, top-scorer in the first innings, and former captain Mushfiqur Rahim were at the crease when Bangladesh reached 42-2. It was only Bangladesh’s sixth test win away from home and its first test win over a team ranked in the top 5 ranked team: New Zealand is ranked No. 2 and Bangladesh No. 9.

The result also brought to an end New Zealand’s unbeaten streak in its last 17 tests at home. Ebadot, a former volleyball player who became a test cricketer after winning a fast bowling competition, had only 11 test wickets at an average of 81 when he came into this match as Bangladesh’s third seamer. He took 1-75 in New Zealand’s first innings of 328 but came into his own in the second innings, running through the middle order on Tuesday with the wickets of Devon Conway (13), Henry Nicholls (0), Tom Blundell (0) and Will Young (69). That left New Zealand 147-5 at the start of play Wednesday, only 17 ahead of Bangladesh.

The possibility of any stern resistance by New Zealand, marshaled around veteran batsman Ross Taylor who was 37 not out when play began, quickly dissolved, thanks to Ebadot. The tall right-armer, who snaps to attention and salutes when he takes a wicket, saluted twice when he bowled Taylor for 40. Then he dismissed Kyle Jamieson to leave New Zealand 160-7. Shoriful pulled off a brilliant diving catch at mid-wicket to complete the second dismissal. Taskin Ahmed then stepped in to help wrap up the New Zealand innings. He removed the other overnight batsman, allrounder Rachin Ravindra, for 16. Ravindra had edged a delivery from Ebadot between first slip and the wicketkeeper but this time the edge carried finer to keeper Liton Das. Taskin bowled Tim Southee (0) and Mehidy Hasan Miraz finished it off with the wicket of Trent Boult, who was brilliantly caught at deep midwicket by the substitute Taijul Islam. “It’s a long story, volleyball player to test cricketer,” Ebadot said. “But I’m a soldier of the Bangladesh Air Force and I know how to salute 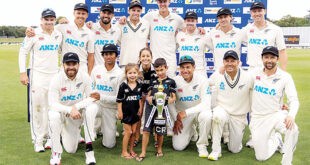 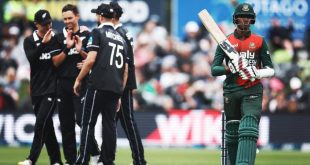