KUWAIT CITY, Nov 25: An officer in the Ministry of Interior has surrendered himself to the security authorities after running over a traffic policeman because the latter issued him a traffic citation, reports Al-Rai daily.

This happened when the victim stopped the motorist for violating a traffic law and after checking his ID he discovered that he is a Kuwaiti, officer working at the Saad Al-Abdullah Academy for Security Sciences.

The daily added, as the traffic man was issuing the citation, the suspect started his car, hit the policeman and escaped.

The victim informed the Operations Room of the Ministry of Interior and he was taken to the Adan Hospital by paramedics. The daily added, as police looked for the suspect, he surrendered to the Mangaf Police Station three hours after the incident. 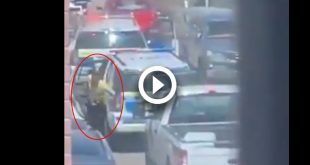 An arrested offender escaped from police vehicle in Sulaibikhat