KUWAIT CITY, May 22: His Highness the Amir Sheikh Nawaf Al-Ahmad Al- Jaber Al-Sabah sent on Sunday a cable of congratulations to the newly elected members of Kuwait Municipal Council for the trust they gained from Kuwaiti people after winning the elections. His Highness the Crown Prince Sheikh Mishal Al-Ahmad Al-Jaber Al-Sabah, and His Highness the Prime Minister Sheikh Sabah Al-Khaled Al-Sabah sent similar cables. First Deputy Prime Minister and Minister of Interior Sheikh Ahmad Nawaf Al-Ahmad Al-Jaber Al-Sabah greatly appreciated the efforts of the Ministry’s Undersecretary Lt. Gen. Anwar Al- Barjas, members of the security establishment and all volunteers for their outstanding work during the municipal council elections on Saturday.

A statement by Sheikh Ahmad Al-Nawaf said “our volunteer sons and daughters” impressively managed an exceptional performance during the 2022 municipal elections. He was also impressed by the management and cooperative measures taken to handle such an occurrence, which as he said was reflected on the field consequent of their awareness and patience to bare such a responsibility.

The four year membership of the municipal council consist of 16 members, 10 of them get elected based on 35-1962 law, while six members gets appointed by a decree within 15 days from announcing the results of the election. Earlier, the Municipal Council elections closed at precisely 8:00 pm at polling centres throughout Kuwait’s eight voting constituencies ahead of the counting of votes. Some 36 hopefuls, including one woman, threw their hat in for the role, some of whom will be ushered in by 438,283 registered voters. (KUNA) 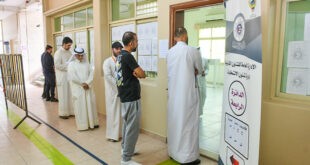