“THE Kuwait Red Crescent is an independent body with no affiliation to any organization or entity other than humanitarian relief. It is no exception here, and its leading role in supporting people, regardless of their ethnic or sectarian identities, is attested from far and near, and it is known by all Arab Crescent societies that it is always coordinating and cooperating between them, to support humanitarian aspects in many parts of the world,” columnist Suad Fahad Al-Mojil wrote for Al-Qabas daily.

“Last March, the Kuwaiti Red Crescent cooperated with its Egyptian counterpart to provide food and medical aid and necessary supplies to people fleeing the war zones in Ukraine.

“Some ignorant people have recently circulated a story of an Egyptian woman in the Kuwaiti Red Crescent, claiming that she is making illegal gains from her volunteer work, in a new escalation that some in Kuwait are practicing against the expatriates, especially the Egyptian brothers. The silly campaign against the expatriates was started by some ignorant politicians, and then they cast it into the sea of social networks, some of which are more often than not run by rumor mongers and fabricate gossip until it snowballs and this calls for a wise and influential state officials to put an end to this with all available means. The Egyptian community have the lion’s share of these rumors and attacks, and let us suppose for the sake of argument that a thousand Egyptian citizens have exploited their presence in provocative practices against Kuwait or in committing various crimes.

“This does not mean at all that a respectable and productive community of more than 600,000 should be taken weighed with a small group of irresponsible people who does not constitute a real number. There is no doubt that we all respect the state’s decision calling for Kuwaitization and empowerment of national cadres, but this remains within the framework of wishful thinking, which is not based at all on a reality that we all agree on. When the Civil Service Commission issued its decision in 2017, calling for determining the percentage of expatriates in government jobs, that decision confused many departments, especially health and education, as Kuwaitis, for example, make up only a very small percentage in disciplines such as physics, mathematics and science in all its forms.

“Such emotional decisions, which are not based on a solid ground of reality, have confused the work system and its actual needs, whether in the government or private sector, especially in light of the latter’s increasing need for a large number of expatriates, which makes dispensing with them temporarily almost impossible.

“The government has a project to reduce the proportion of expatriates in relation to the population from 70% to 50% within 6 years. It is an inapplicable project, and any citizen, without studies or numbers can confirm this truth.

“Expatriate labor in all fields is still a major driver that cannot be reduced in this way and within the announced time frame, and perhaps the report published by ‘The Economist Intelligence’ confirms this, as it indicated in its report that more than 65% of expatriates in Kuwait work within the two ministries of health and education in the public sector, which are likely to face operational disruptions due to the departure of expatriate workers at a time when government efforts are increasingly directed towards health care and human resources.

“False news and misleading clips that are published in the social media have fueled an electronic campaign to stop visas for Egyptian labor, which led to a widespread rumors and misinformation, accompanied by unfortunate insults that serve nothing.

“The campaign of some ignorant people against the expatriates, especially the Egyptian brothers, has been accompanied by a lot of abhorrent racism that has fueled hatred dangerously, and if there are those who misuse their residence in Kuwait, in return there are tens of thousands of esteemed accountants, respected advisors, workers, technicians, qualified architects and skilled teachers and distinguished doctors, and many other professions in which the expatriate works with respect, whether he is an Egyptian or from any other sister country.”

Share
Previous ‘He who laughs last, laughs best’
Next Seeing is believing 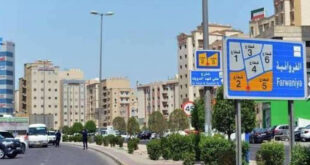 This post has been read 75698 times! “ALL indications confirm that state officials are targeting …