Odenkirk to star in the thriller ‘Nobody’

Who’s that amazingly expressive actor they got to play Diego Maradona? The one you can’t take your eyes off of, whose every facial muscle can project joy, pain, sadness, humor or anger from miles away, and sometimes all at once?

Oh wait – this is a documentary, and this is Maradona himself, one of the most colorful and fascinating personalities in all of sports, with a life story bordering on the mythic. You may know the outlines of the soccer legend’s life, but there’s no way you won’t learn something from “Diego Maradona”, Asif Kapadia’s absorbing and exhaustive new film.

Most documentaries cut frequently to talking heads. Kapadia, who won an Oscar for “Amy”, about Amy Winehouse, doesn’t do that, preferring to keep the viewer firmly planted in the narrative he’s crafted from hundreds of hours of never-seen archival footage. The approach is hugely effective here because we don’t see the older, larger Maradona, now 58, until the very end.

Much of the footage Kapadia has unearthed here is nothing short of mesmerizing, both for highly dramatic moments like Maradona’s hero welcome in Naples, where he was to spend seven chaotic years, and quiet moments like the athlete simply sitting at a party and saying nothing, looking lost and miserable as the world starts to crumble around him.

Because the Naples years form the heart of his film, Kapadia spends only a few minutes on Maradona’s beginnings, from his birth in a Buenos Aires shantytown to his rise as a soccer prodigy who began supporting his family from age 15.

By the time Maradona arrives in Naples in 1984, he’s greeted; the southern city is hungry to challenge the traditional soccer powerhouses further north. Some 75,000 adoring fans gather in the city’s stadium to welcome him.

A soccer genius celebrated as much for his brilliant instincts and vision on the pitch as his physical abilities, he turns Napoli into a winning team. He’s rewarded with a stardom that is hard to fathom.

Things are soon to unravel. Maradona’s cocaine habit worsens, but as long as he is winning, his team bosses don’t seem to care. He is high half the week, then cleanses his system to play on Sunday.

Then comes the 1990 World Cup in Italy. Maradona and Argentina are forced not only to face the Italian team in its home country, but to play the semifinal match in Naples itself, Maradona’s home stadium.

It’s a prescription for disaster. He naively asks Neapolitans to support Argentina, and headlines interpret him as saying “Naples is Not Italy”. The Naples fans avidly support their own country and are devastated when Argentina wins, on penalty kicks.

Argentina will go on to lose the final, where Italian fans boo during the Argentine anthem, and he curses back. Maradona’s ties to Italy appear broken.

In 1991, Maradona receives a 14-month suspended sentence on cocaine possession charges in a plea-bargain agreement. He also gets a 15-month suspension from soccer after testing positive for cocaine.

LOS ANGELES: “Better Call Saul” star Bob Odenkirk has signed on to star in the thriller “Nobody”.

The Universal pic follows Hutch Mansell (Odenkirk), a suburban dad, overlooked husband, nothing neighbor – a “nobody”.

When two thieves break into his home one night, Hutch’s unknown long-simmering rage is ignited and propels him on a brutal path that will uncover dark secrets he fought to leave behind.

Odenkirk was recently nominated for an Emmy for best actor in a drama series for his work on “Better Call Saul”, a nod he has recieved three other times. The role has also garnered him three Golden Globes nominations. On the film side, he was recently seen in the Charlize Theron-Seth Rogen comedy “Long Shot”, and he will appear in Sony’s star-studded adaptation of “Little Women”, bowing this Christmas. (Agencies) 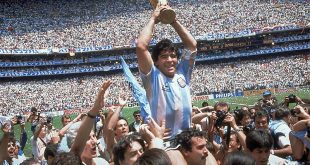