KUWAIT CITY, June 27: The Sabah Al-Ahmad Center for Giftedness and Creativity of the Kuwait Foundation for the Advancement of Sciences honored on Monday two Kuwaiti doctors who obtained a US patent for a medical splint used in surgical operations. The Director of the Innovation Department, Hamad Al-Aftan, told Kuwait News Agency (KUNA) that the Center for Giftedness and Creativity sponsors and embraces talented people in the State of Kuwait by receiving their ideas, empowering them and helping them to transform their ideas into application through the center’s workshops, existing tools and 3D printers.

Al-Aftan expressed the center’s pride in issuing the invention certificate and handing it over to Dr. Abdul Mohsen Al-Turki and to Dr. Muhammad Kamal at Kuwait University for the invention of the nasal splint. He stated that the center was able to develop 120 inventions, and in the last stage, converting these ideas into commercial products sold in international markets, explaining that the center is in the process of completing the work of the experimental model for medical inventors. The consultant of ear, nose, throat and head and neck surgery at the Ministry of Health, Dr. Abdul Mohsen Al-Turki, said in a similar statement to KUNA that the invention according to which they obtained the patent is a surgical tool used as a splint containing a side cavity to ensure breathing and prevent difficulty in breathing even if the patient suffers from suffocation while sleeping.

Al-Turki added that there is a delivery tube for medicines such as ointments and antibiotics, and it reaches directly to the nasal septum without disturbing the patient or affecting his breathing through spaced delivery ports or openings. Professor of Oral and Maxillofacial Surgery at Kuwait University Dr. Muhammad Kamal confirmed in a similar statement to KUNA that using this splint there will be no need to put the nasal wicks that were previously placed and caused difficulty in breathing while in the nose, which caused severe pain when removed.

Invention
Kamal indicated that one of the advantages of the invention is that the patient can breathe directly from his nose without any problems compared to the old wick system, and one of its advantages is that it allows the addition of medical materials directly on the site of the operation and directly on the nasal septum without hindering the breathing process and not causing pain to the patient while it is in the nose or even while withdrawing it after surgical intervention. The two doctors expressed their deep thanks to the Sabah Al-Ahmad Center for Giftedness and Creativity, one of the centers affiliated with the Kuwait Foundation for the Advancement of Sciences, for the support and encouragement that the center provides to inventors in various practical and medical specialties. , (KUNA) 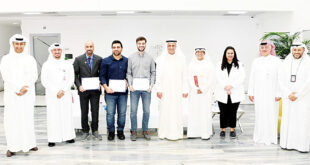