MADRID, May 29, (AFP): Thousands of Real Madrid fans chanted and waved supporter scarves under a rain of confetti on Sunday in the Spanish capital as the team returned home after an historic 11th European Cup win. An open top bus emblazoned with the word “Campeones” (Champions) carried the team, who showed off the trophy to fans who had spent hours awaiting their heroes in the heart of the city.

“How can I not love you!,” shouted the ecstatic crowd at the Plaza de Cibeles — a traditional meeting point for Real’s trophy celebrations. Three-time World Player of the Year Cristiano Ronaldo struck the winning spot-kick in a 5-3 penalties victory over Atletico Madrid at Milan’s San Siro stadium. It is the second time in three years that Real have defeated Atletico in the final.

The players snapped photos of the raucous crowd from a platform specially erected at Cibeles, and team captain Sergio Ramos waved the large silver trophy for the cheering supporters. At Real’s Santiago Bernabeu stadium around 50,000 supporters had followed the action from the tense final on four giant television screens.

The Real Madrid players, who arrived home from Milan around 6:00 am (0400 GMT), headed directly for Cibeles where the fans had been celebrating since midnight. The football-mad Spanish capital of 3.2 million people had been dominated by the two clubs crests and colours in a frenzied build-up to the final, which was expected to attract a worldwide audience of 180 million people in over 200 countries.

Praise poured in for Real Madrid, including from Spain’s acting Prime Minister Mariano Rajoy. “Epic final in the League of Champions,” he tweeted. “Congratulations to all… for the 11th.” Another public celebration with the team is planned for Sunday night in their stadium, which will follow a reception with city leaders. “I am delighted. Two Champions League titles in three years, it is incredible,” said Monica Gonzalez, a 25-year-old Real fan.

“They (Atletico) deserved it. They almost played better. I am happy my team won, but it could have been any of the two teams.” However, Gonzalez’s boyfriend Jaime de Francisco, an Atletico fan, couldn’t hide his disappointment as once again the red and white half of Madrid was forced to life in Real’s shadow. Just 500 metres (yards) away from wild scenes of celebration at Cibeles, the Neptuno fountain — where Atletico fans go to celebrate their triumphs — was empty.

Meanwhile, Zinedine Zidane hailed Real Madrid as the “club of my life” after a dramatic Champions League penalty shoot-out victory over Atletico Madrid that left Diego Simeone pondering his future. Having been the assistant to Carlo Ancelotti when the Italian coaching great steered Real to the 10th — ‘La Decima’ — title in Lisbon two years ago, Zidane now gets a taste of the trophy for a third time after joining an elite few who have lifted the trophy as a player and a coach.

Once a favourite at Juventus, the 43-year-old Zidane said there is now no other club in his heart. “I was given the chance to come to this amazing club, and then to coach it. I have a phenomenal team and great players who are also talented, and it was together we achieved what we did tonight,” he said. Despite Yannick Carrasco levelling on 79 minutes, Atletico were undone on penalties after club favourite Juanfran’s effort came off the upright, handing Cristiano Ronaldo the chance to secure Real’s 11th crown with his subsequent spot kick.

It left Simeone devastated, and the Argentinian gave an indication of his feelings when he admitted he could be pushed to think about his future with the two-time Europa League winners. “I think I could start thinking about my future,” Simeone said cryptically. “It puts a lot of years on you.” He added: “Congratulations to Real Madrid — once again they were superior to us, this time on penalties.

“What really hurts me is to see the hurt of the people who’ve paid to come here — I feel a bit responsible that I wasn’t able to give them what they wanted. That’s what really hurts. “I feel responsible for the fans who have bought their tickets.” Atletico have still never lifted the European Cup, also losing the 1974 final to Bayern Munich in a replay. 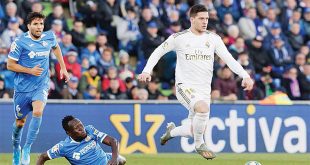